Parliament kicks off new year with constitutional changes on agenda 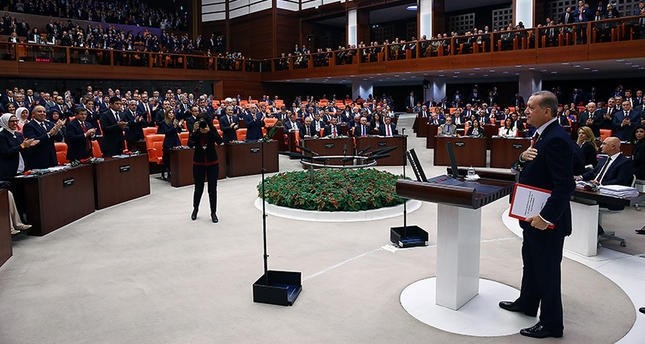 President Erdou011fan approaches to the rostrum at the Parliament to make his address for the first session of the new legislative year. (AA Photo)
by daily sabah
Jan 03, 2017 12:00 am

As the constitutional reform package was adopted by the Parliamentary Constitutional Committee during the last week of 2016, the Parliament's General Assembly is set to begin its discussions on the package by Jan. 10 to move forward toward a referendum.

Following 10-day-long discussions, the Parliamentary Constitutional Committee approved a bill early last Friday proposing a set of constitutional changes, including a switch to a presidential system of governance in Turkey.

While the final meeting of 2016 was the lengthiest, with 17 hours of discussion, the proposed constitutional bill was reduced to 18 articles from the original 21 and was passed by the committee with 316 votes from the ruling Justice and Development Party (AK Party).

Once the General Assembly begins its discussions on the bill, there will be two rounds of voting in which the deputies first vote on each article and then vote for the package as a whole.

As the discussions at the General Assembly are expected to begin by Tuesday next week, the opposition Republican People's Party (CHP) and pro-PKK Peoples' Democratic Party (HDP) were to present their dissenting opinions yesterday.

The proposed bill is also expected to take 13-15 days of discussions at the Parliament's General Assembly.

Additionally, with the ruling AK Party having 316 seats and the MHP 39 seats, it is expected that with support of the two parties the constitutional amendment is likely to be passed in the General Assembly before the end of January, and a referendum for the amendment package is expected to take place in the spring of 2017.

Meanwhile, if the proposal passes Parliament and is voted for by the public in a referendum, Turkey is to undergo a transitional period until 2019 after the new system comes into full effect.

In that respect, according to the draft bill, the president and vice presidents get executive powers while abolishing the post of prime minister, the age of candidacy for parliament will be lowered from 25 to 18 and the number of parliamentarians will be increased from 550 to 600 in accordance with the country's growing population.

In addition to the constitutional amendment package, Parliament's agenda is also focused on the topics of the retirement-pension grant draft bill, along with electing members to vacant seats for the Parliament's Protection of Personal Data Committee.

Today the Parliament's General Assembly is scheduled to address the motion of censure regarding the administrators appointed to pro-PKK/HDP municipalities concerning aiding and abetting a terrorist group and terror financing.