Opposition leaders Kılıçdaroğlu and Bahçeli to meet on constitutional change 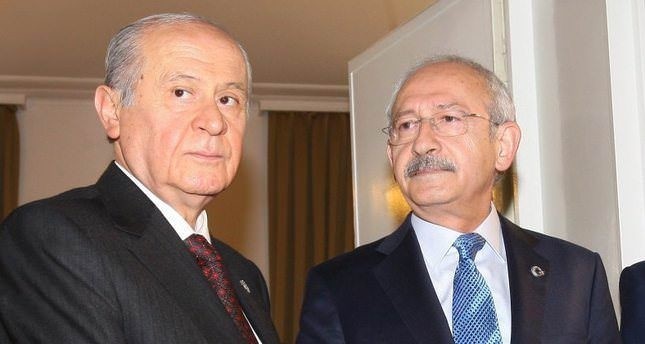 The two will meet at 12:00 p.m. local time just as the second round of voting on the amendment kicks off in the General Assembly.

Kılıçdaroğlu had previously asked Bahçeli for a meeting to express his party's point of view on the issue as well as see his party's stance on a possible switch to the presidential system.

The party argues that the constitutional amendment will result in a regime change in Turkey, saying that it may endanger national sovereignty. Moreover some CHP deputies believe that the new constitution is being rushed.

On the other hand, Bahçeli has openly expressed his support for the constitutional change, calling for snap elections if the changes are to fail in the Parliament.

CHP has been criticized for its attempts to deadlock talks in the Parliament, and its members have come under fire for causing a fistfight, which saw a deputy's nose broken and another's leg being bitten.

Meanwhile, the General Assembly concluded the first round of voting on all 18 articles of the constitutional amendment package in the late hours on Sunday. All the articles passed with 330 votes in favor threshold.

They will now be voted as a bundle in the second session of the discussion which is expected to take place on Wednesday. The same limit of 330 votes will be sought for the bundle and failure to achieve so will result in the dismissal of the amendment as a whole.