Everything you need to know about Turkey’s constitutional reform 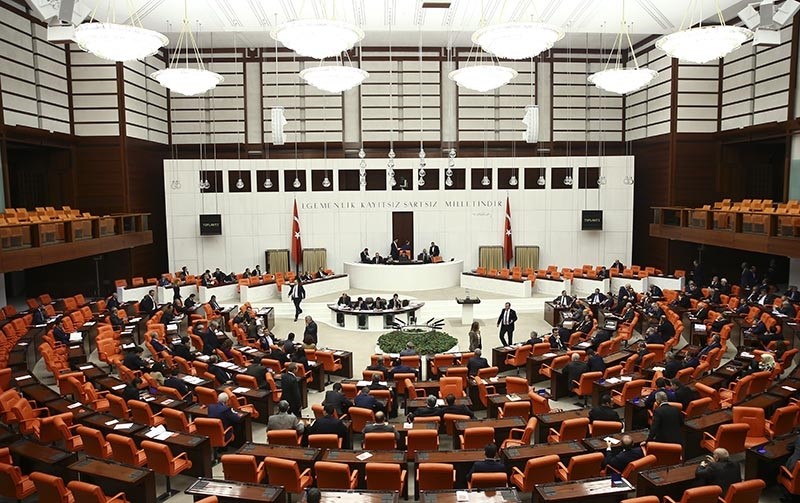 The constitutional amendment proposal, which is expected to be put to referendum after receiving Parliament's approval and change the fate of Turkey's political future, will bring stability and put an end to decades of political crises that paralyzed the country, supporters of the amendment have said.

Referred to as the 'Turkish-style presidency,' the constitutional change will bring about a number of reforms, and replace the current parliamentary system in which the president serves only as a ceremonial figurehead alongside a prime minister, with a presidential system, which will allow the president to become the sole executive head of state in the country.

Contrary to claims by the opposition that the constitutional reform aims to establish a one-man rule and change the regime in Turkey, many politicians and columnists have highlighted that the reforms aim to solve the problems of the existing system, which has been a matter of political debate for decades.

"We know that the constitutional change proposal has been prepared taking into consideration decades of debates and repetitive political crises," Nebi Mis, who is a political research director at the Ankara-based think tank the Foundation for Political, Economic and Social Research (SETA), wrote in his column at Türkiye daily, noting that it is obvious that the proposal has been prepared under a framework which aims to prevent such crises from being repeated in the future.

Under the proposed system, a number of changes will be made in the legislative branch; increasing the number of lawmakers to 600 from 500, and lowering the age of candidacy to become a lawmaker from 25 to 18. Presidential and parliamentary elections will also simultaneously be held every five years, while the Parliament will retain its prerogative to legislate, amend and annul, as well as make calls for debates, submit question motions and conduct parliamentary inquiries. 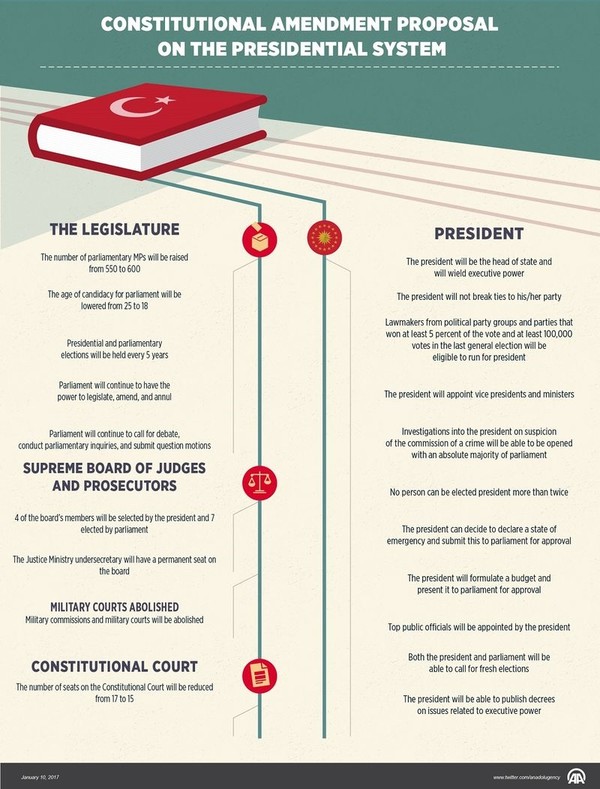 More importantly, the office of the prime minister and the cabinet will be abolished and the president will become the head of the executive branch.

He/she will be able to keep affiliation with a political party, while also being criminally liable. Furthermore, the president will be able to publish decrees, formulate a budget and appoint vice presidents and ministers. The proposal also prevents the election of a person as president more than twice.

Meanwhile, a number of changes will also be made to Turkey's Supreme Board of Judges and Prosecutors (HSYK). Accordingly, the justice ministry undersecretary is expected to have a permanent seat on the board, while four of the board's members will be selected by the president and seven others will be elected by Parliament. Experts have noted that the appointment of judiciary by democratically-elected persons will prevent bureaucratic exploitation.

With regards to constitutional courts, the number of seats will be reduced to 15 from 17, while military commissions and courts will be abolished.

Even though the constitutional reform draft proposes to change the system of governance, it aims to get rid of the 'last traces' of the system of tutelage and strengthen the rule of law and democracy, experts at SETA have said in an infographic published online (in Turkish).

For instance, by getting rid of military courts, the new constitution will remove article 122, which had been drafted during the martial law period by the coup administration in 1982, thus completely abolishing the potential of a coup attempt, which has devastated the country for years, and most recently was thwarted on July 15, 2016 by millions of people who defended democracy. Furthermore, the State Inspection Committee will be authorized to carry out inspections on the Turkish Armed Forces (TSK), which was prohibited by the existing constitution.

The first four articles of the constitutional amendment package concern the exercise of judicial power, an increase in parliament seats, lowering of the age of MP candidacy and regulations on parliamentary and presidential elections, respectively.

The fifth article deals with regulations for job definition and responsibilities of the parliament, and seeks to end Parliament's authorization to inspect ministers and the Cabinet.

The sixth article concerns the Parliament's information gathering and inspection processes, while the seventh article allows the president to maintain ties with a political party.

Article eight of the draft involves the president's prerogative to have executive power to appoint and dismiss ministers as the 'head of state', while Article nine adds that the president can not take an election decision during his or her inquiry process.

Article 10 enables the president to appoint more than one vice president, while Article 11 envisages holding presidential and parliamentary elections at the same time.

Article 12 specifies the circumstances when the president will be able to declare the state of emergency, while Article 13 stipulates that military courts cannot be established except for disciplinary ones, whereas Article 14 aims to change the structure of top judicial board HSYK.

Separately in Article 15, expenditures of public entities will be made in accordance with the annual budget, while the new government system's implementations have been accepted in Article 16 of the proposal.

The last two articles of the constitution deal with regulating parliamentary and presidential elections, and the president's affiliation with a political party respectively.

A recent survey conducted by the Objective Research Center (ORC) discovered that over 60 percent of Turkish people support the constitutional reform package.

The Turkish parliament adopted the last two articles of the reform package on Sunday, completing the first round of voting.

The proposed changes must first be passed by 330 deputies in order for a referendum to be held. If the proposal gets the support of 367 lawmakers it could pass into law without a referendum, although the ruling Justice and Development Party (AK Party) said it would hold a popular vote regardless.

The AK Party has 316 seats and President Recep Tayyip Erdoğan hopes the support of the opposition Nationalist Movement Party (MHP), which has 39 seats and last month agreed to back the package, will be enough to secure a referendum.