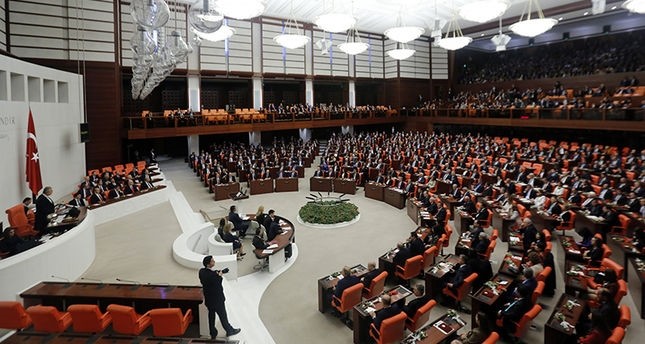 Turkey's parliament has adopted the first ten articles of a new constitutional reform package before a referendum likely to be held in April.

The second round of voting over the constitutional reforms began late Wednesday after almost three weeks of debates at the parliament.

The first round of voting was completed with the Parliament passing a total of 18 articles - each with over 340 'yes' votes.

On Article 1, 345 of 550 lawmakers voted in favor to pass the measure, while 140 rejected the motion; one paper was left blank; 64 lawmakers were absent.

It changes the ninth article of the Constitution - "the judicial power shall be exercised by independent courts on behalf of the Turkish Nation" - to read "independent and impartial courts".

The second item of the package increases the number of lawmakers from 550 to 600 in accordance with the rising population.

A total of 480 lawmakers took part in the second ballot. It passed with 342 votes in favor, 139 against, four blank ballots; 65 lawmakers were absent.

Article 3, which lowers the age of candidacy for parliament from 25 to 18, passed with 342 'Yes' votes while 137 rejected the motion; three papers were left blank and three were invalid.

Voting on the remaining 15 amendments will continue late on Wednesday, Thursday and Friday.

The ruling Justice and Development Party (AK Party) aims to approve six articles per day in the second round of the voting and finish it by Saturday.

Each of the 18 articles will be voted on separately. Another vote on the entire constitution will follow.

An affirmative vote for an article totaling less than 330 lawmakers, will not pass. If the number of affirmative votes of the lawmakers for the whole constitution stays under 330, the bill will be dropped.

A referendum on the proposed sweeping changes to Turkey's constitution will likely take place in the beginning of April, according to Deputy Prime Minister Numan Kurtulmuş.

The constitutional package gives the executive power to the president and vice presidents while abolishing the post of prime minister. In addition, it lowers the age of candidacy for parliament from 25 to 18, and increases the number of MPs from 550 to 600 in accordance with the growing population, among other amendments.

The AK Party and the opposition Nationalist Movement Party (MHP) have struck an agreement over the constitutional change, which will likely help them carry the bill to a referendum.

Constitutional change - in particular, the call for a presidential system - has been on the political agenda since Recep Tayyip Erdoğan, the former prime minister and AK Party leader, was elected president in Aug. 2014.

That election was the first time a Turkish president was directly chosen by popular vote.

In the current parliamentary model, Turkish people vote for 550 members of parliament. The government is formed by minimum number of 276 lawmakers.