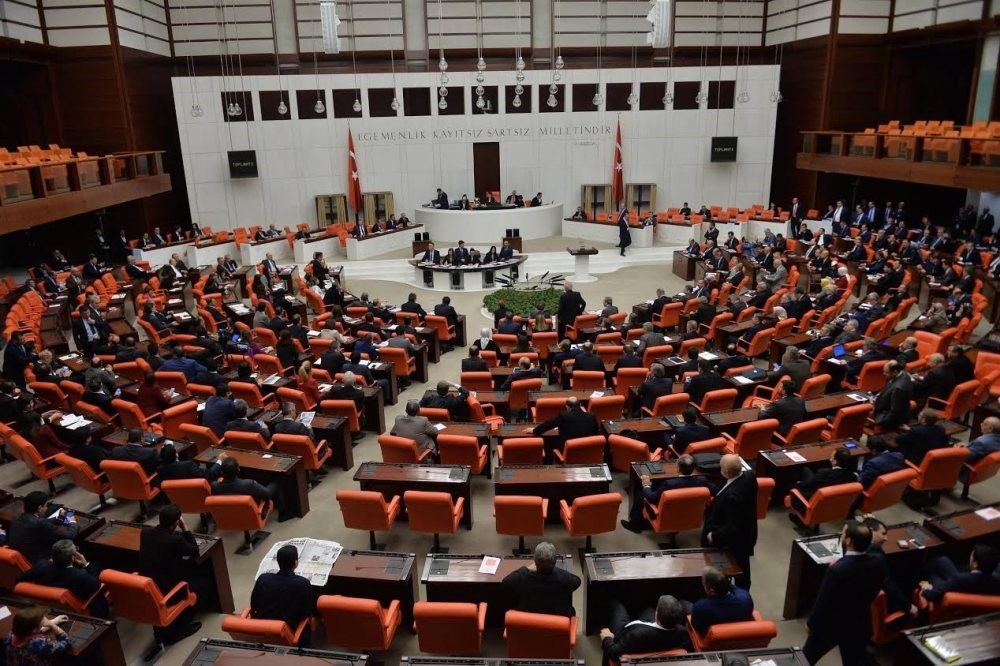 The Turkish Grand National Assembly (TBMM) in Ankara during the voting for constitutional changes in January.
by Mehmed Cavid Barkçin Jan 25, 2017 12:00 am

Deputy Prime Minister Numan Kurtulmuş said yesterday that the Prime Ministry post will continue until the 2019 elections, despite it being eliminated in the new constitution, which will be put to a referendum in the coming months

Turkey's Deputy Prime Minister Numan Kurtulmuş has assured that the current Justice and Development Party (AK Party) government will "serve until 2019," in remarks made Tuesday to Anadolu Agency.

Echoing Kurtulmuş, Justice Minister Bekir Bozdağ affirmed that a change in the Turkish regime was out of the question in statements he made to a private TV channel on Tuesday.

Both government officials indicated that the proposed constitutional amendment, which was recently passed in Parliament and expected to be put to a referendum in the months to follow, will change the system of government from a parliamentary system to a presidential one.

Justice Minister Bozdağ also dismissed allegations that a regime change is underway, calling it a "false accusation" and "misinformation."

Speaking about the general outline of the presidential system, Kurtulmuş asserted that changing the system will make the Turkish government more efficient in governance, resulting in faster economic development. On the other hand, Kurtulmuş assured that the AK Party is to "serve until 2019." Moreover, he added that the Prime Ministry will continue to function until the transition is completed.

"For instance, with increased efficiency and consolidation of the executive powers, we may overcome terrorism relatively easily," Kurtulmuş added.

Addressing the increased powers granted to the president under the proposed system, the deputy prime minister expressed that there will be a solid set of mechanisms which will keep the president in check.

Regarding the upcoming campaign process for the referendum, Kurtulmuş expressed that the ruling AK Party and the Nationalist Movement Party (MHP) will run their campaigns separately, even though both parties will be campaigning for the approval.

Analogous to the deputy prime minister's remarks, Minister Bozdağ also discussed the presidential system and affirmed that a president should be able to keep the ties with their parties intact.

"Deputies, mayors, the parliamentary spokesperson and the prime minister are all allowed to be party members even though some, for instance, the spokesperson, are required to be impartial. Their party affiliations do not harm their impartiality, so why should it harm the president's?" Bozdağ asked.

Regarding concerns of authoritarianism and dictatorship, Bozdağ said that the new system will further clarify the separation of powers, expressing that the currently intertwined legislative and executive branches will be separated with the transition to the new system.

Moreover, he asserted that the amendment includes making the president subjected to criminal liability, thus being held responsible for every action and inaction.

"It will effectively eradicate the possibility of a dictatorship," Bozdağ said.

He also touched on the main opposition Republican People's Party's (CHP) appeal to the Constitutional Court. Disclaiming the accusations of the CHP that a regime change is being imposed, Bozdağ asserted that these accusations were nothing more than an attempt to misinform the public.

In addition, Turkey's minister of justice signified that no one was trying to alter the attributes of the regime or the Republic directly or indirectly while reiterating that they were not proposing any change to the first four articles of the Turkish Constitution.

The constitutional amendment in question was passed by Parliament last Friday before it was submitted to the president for review and ratification. To be held 60 days after the president's ratification, the referendum is expected to be completed within the first weeks of April. The amendment will be implemented if it successfully acquires the minimum number of parliamentary votes in the referendum.
RELATED TOPICS