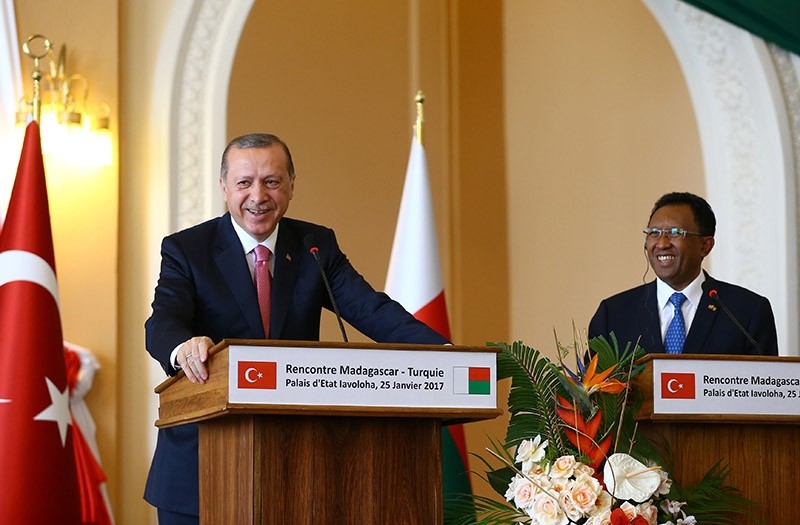 Turkish President Recep Tayyip Erdoğan said Wednesday in Madagascar that he will move very quickly to approve the constitutional amendment package, which was approved by the parliament.

During his speech, delivered at a press conference with his Malagasy counterpart Hery Rajaonarimampianina, Erdoğan answered questions regarding the legislation.

He said that the constitutional amendment package, foreseeing a switch to a presidential system, would be ratified without losing any time.

During his speech, Erdoğan thanked Rajaonarimampianin and said that they had discussed how bilateral relations between both countries could be further developed.

The signing ceremony took place at the presidential palace in the capital city, Antananarivo, where Erdoğan met his Malagasy counterpart President Hery Rajaonarimampianina.

Foreign Minister Mevlüt Çavuşoğlu also signed a memorandum of understanding on cooperation and consultation between the ministries of foreign affairs of Turkey and Madagascar.

Turkish Minister of Economy Nihat Zeybekci signed a protocol on the application of aid between the two countries.

Erdoğan stressed that Turkey does not have a colonialist vision in its approach to Africa, while also noting that Turkey's aim is a win-win deal with African nations in every field.

Madagascar is the last country the President visited in his 3-day Africa tour, which seeks to improve ties between Turkey and the continent. Erdoğan had visited Tanzania on Monday, and Mozambique on Tuesday.