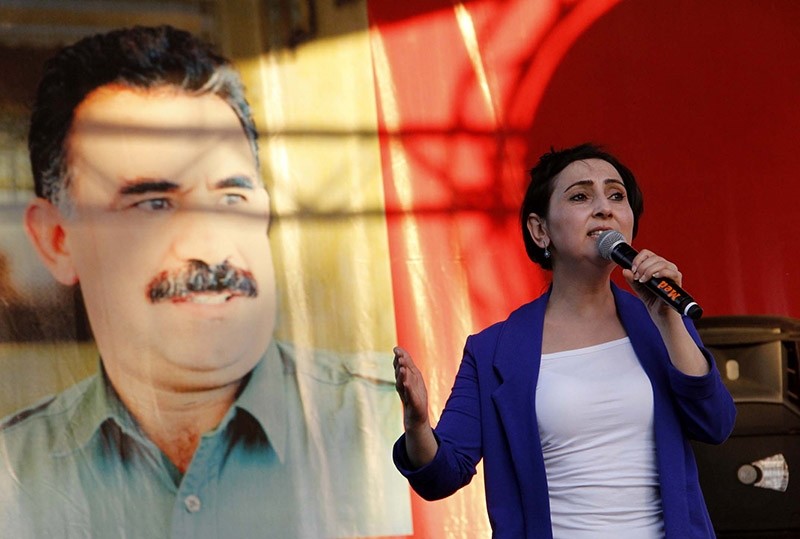 Yüksekdağ was sentenced to 10 months in prison over charges of spreading terror propaganda on Nov. 27, 2013, which was approved by the Supreme Court of Appeals (Yargıtay) on Sep. 22, 2016.

The prosecution began after a group, including Yüksekdağ, held a funeral ceremony for Yasemin Çiftçi, who was a member of the Marxist-Leninist Communist Party (MLKP) terrorist organization when she was killed in 2012 after a handmade bomb exploded in her hands in Istanbul.

An official note by the Prime Ministry addressed to the Parliament Speaker's office reminded that Yüksekdağ's sentence had been approved and asked for necessary procedures to be carried out.

Deputy Parliament Speaker Ayşenur Bahçekapılı announced Tuesday that Yüksekdağ's sentence was finalized, and she was stripped of her deputy status in accordance with the constitution.

Prior to her role in the HDP, Yüksekdağ was the chairperson for the Socialist Party of the Oppressed (ESP), which is often referred to as the legal political organization of the illegal MLKP.

In 2012, it was revealed that Yüksekdağ had close connections with the MLKP and its affiliate ESP. In a closed-door commemorative meeting for an MLKP-linked suicide bomber who was killed in an attempt to attack a Justice and Development Party (AK Party) building in Istanbul in 2012, Yüksekdağ said: "We have taken many lives and have lost many lives" in our "revolutionary march in this country." Yüksekdağ's statement was wiretapped by court decision.

She also attended the funeral of MLKP terrorists Şirin Öter and Yeliz Erbay, who were killed in a dawn raid in December 2015 by anti-terrorism police when they opened fire on police closing in on them in Istanbul's Gaziosmanpaşa district.

Yüksekdağ also drew heavy criticism for her alleged pro-PKK stance. "We support the YPJ [Women's Protection Units], the YPG [People's Protection Units] and the PYD [Democratic Union Party], and we do not see any harm in mentioning and defending it," she said in July 2015. Yüksekdağ also praised the PKK and described it as "a national liberation movement and also an organization that stands for democracy and equality." A summary of proceedings was prepared after her remarks.

The MLKP, established in 1994, is a designated terrorist organization. Its first major attack was in 2004 when a bomb planted by MLKP militants on a street near a hotel where then-U.S. President George W. Bush was staying exploded, injuring several people.

The MLKP, unlike the far-left Revolutionary People's Liberation Party-Front (DHKP-C), has close ties with the PKK, which pursues a more ultranationalist line. The group had training camps in a mountainous area in northern Iraq where the PKK is headquartered. The terrorist group is also involved in the Syrian civil war alongside the ranks of the YPG, which is the armed wing of the PKK's Syrian offshoot the PYD.

Yüksekdağ's husband, Sedat Şenoğlu, was also sentenced to prison for seven years and six months in May 2016 due to acts linked to the MLKP.

The number of HDP deputies in parliament decreased from 59 to 58 as Yüksekdağ was stripped of her deputy status.

In November, 13 HDP lawmakers were arrested, and 10 of them – including HDP co-leaders Selahattin Demirtaş and Figen Yüksekdağ – have remained in custody pending trials on terrorism-related charges.

The HDP deputies were arrested after they failed to answer a summons to testify as part of a counter-terrorism investigation.

The government has accused the HDP of having links to the PKK, which is listed as a terrorist organization by Turkey, the U.S. and EU.