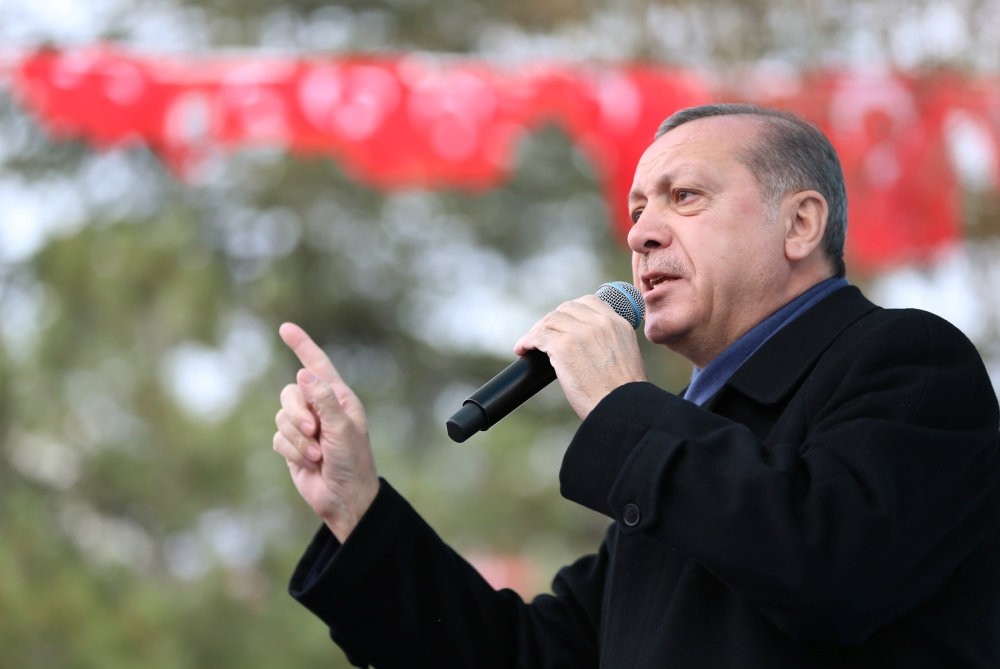 President Erdoğan called for unity between every political party ahead of the constitutional change referendum, which, he said, will pave the way to fulfill Turkey's 2023, 2053 and 2071 goals

President Recep Tayyip Erdoğan called on the supporters of every political party Friday to unite in favor of the constitutional amendment package ahead of the historical referendum to be held in less than a month. "I call on my citizens in favor of the CHP [Republican People's Party], HDP [Peoples' Democratic Party] and the Felicity Party, to come join us and let us become one, become strong, become brothers and sisters. Let's unite and become Turkey all together," Erdoğan said while addressing a large crowd in Eskişehir. President Erdoğan added that Turkey would fulfill its 2023, 2053 and 2071 goals with a presidential system.

On Dec. 30, a constitutional committee of deputies from the ruling Justice and Development Party (AK Party) and the opposition Nationalist Movement Party (MHP) submitted a proposed bill to Parliament for ratification. After Parliament approved the constitutional amendments on Jan. 2, with deputies completing two rounds of voting on 18 articles, the changes were ratified by President Erdoğan. A total of 339 deputies voted in favor of the package that will be voted on in the April 16 referendum. Ahead of the referendum, politicians, including President Erdoğan, began campaigns regarding the constitutional amendment package by elucidating the details to the public. In that respect, Erdoğan yesterday in Eskişehir asserted, "On April 16, we are switching to a new governing system." He added, "Through the presidential system we bring, Turkey will reach its 2023 goals then fulfill its 2053 and 2071 goals."

Underlining that April 16 is to be "revenge" for July 15, President Erdoğan reiterated that all terror groups, including the PKK, the Gülenist Terror Group (FETÖ) and Daesh have joined forces with the main opposition Republican People's Party's (CHP) "no" bloc. "They are no different from each other. I am now saying that AK Party supporters are voting 'yes,' MHP supporters voting 'yes' as well as the Grand Unity Party (BBP). Thus, I call on my CHP supporter citizens, HDP supporters and Felicity Party supporters. Come join us, and let us become one, become strong, become brothers and sisters. Let's unite and become Turkey all together," Erdoğan added.

Meanwhile, Prime Minister Binali Yıldırım also speaking in the northeast province Gümüşhane yesterday noted that national investment, which provides new employment areas for the Turkish nation, will increase with the constitutional reform after April 16. "The national income will rise above $25,000," the prime minister said.

Stressing the importance of political stability for development, Yıldırım made a comparison between well-developed countries, such as the United Kingdom, forming 15 governments before 1950 and Turkey. "On the other hand, Turkey formed 48 governments. It means that Turkey lost a lot of time with powerless governments," Yıldırım said. Additionally, Yıldırım pointed out that the constitutional amendment would ensure judicial impartiality and independence as he added, "The two-headed system in court [which military officials and civilians are separately judged] would be removed with the new system."
RELATED TOPICS