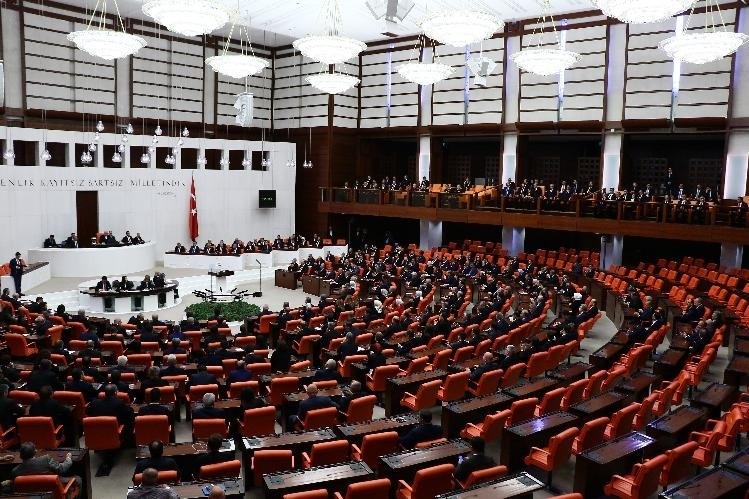 The Grand National Assembly of Turkey convened yesterday under a special plenary session to mark the April 23 National Sovereignty and Childrenu2019s Day.
by Daily Sabah Apr 24, 2017 12:00 am

President Recep Tayyip Erdoğan and PM Binali Yıldırım said yesterday, during the events held at Parliament to mark National Sovereignty and Children's Day, that with the new constitutional amendments Turkey has accepted a system that will strengthen its democracy and stability, while blocking the possibility of attacks on the people's will

Marking the occasion of National Sovereignty and Children's Day on April 23, Turkey's political party leaders addressed Parliament with Prime Minister Binali Yıldırım saying that the new presidential government system has further strengthened the functionability of the Turkish Parliament, democracy and stability. In addition, President Recep Tayyip Erdoğan also underlined that the people's will must also be embraced and that deputies will work to ensure that Parliament is strengthened. Speaking in Parliament as the prime minister and chairman of the ruling Justice and Development Party (AK Party), Yıldırım began by stressing that children are certainly the future of Turkey, stating that "under the new system, a modern era of permanent stability and strong governance has begun. Parliament is further strengthened."

Continuing on by touching on the newly accepted presidential government system, Yıldırım said: "A referendum was held and the people [of Turkey] have accepted the new system. From now on, we must look forward. Let us work together to lead our nation to new heights, to the level of a contemporary civilization under the roof of this our own parliament." While reminding members of Parliament that Turkish democracy has faced attacks every 10 years, even leading to the closure of Parliament from time to time, the Turkish prime minister indicated that the newly adopted constitutional amendment package will put an end to these setbacks.

Meanwhile, Turkey's President Recep Tayyip Erdoğan responded to questions from members of the media at Parliament prior to the special session for April 23, saying: "I sincerely believe that this Parliament will continue its work with all means of sensitivity. The whole point is leaving emotions and feelings aside and moving on to the future under the light of wisdom. Our first important step is building and reviving the future while respecting the national will." Underlining that the people displayed their will on April 16, President Erdoğan once more thanked the citizens and added that "The people's deputies will further strengthen our Parliament in the upcoming period from now on."

Also speaking in Parliament, main opposition Republican People's Party (CHP) Chairman Kemal Kılıçdaroğlu began his remarks by criticizing the constitutional amendment package, continuing with criticism and accusations. Kılıçdaroğlu claimed that Parliament has seen its reputation tarnished with the new system, going on to criticize the 10 percent electoral threshold. Taking the stage after Kılıçdaroğlu, opposition Nationalist Movement Party (MHP) Chairman Devlet Bahçeli analogous to Prime Minister Yıldırım said Parliament has indeed been further strengthened with the April 16 referendum on the constitutional amendment package. Bahçeli said, "Following the April 16 referendum, Turkish Parliament has been further strengthened. With the new governing system, the country's April 23, 1920 sprit has been solidified and national sovereignty has been enhanced. No one should become a crises crier."