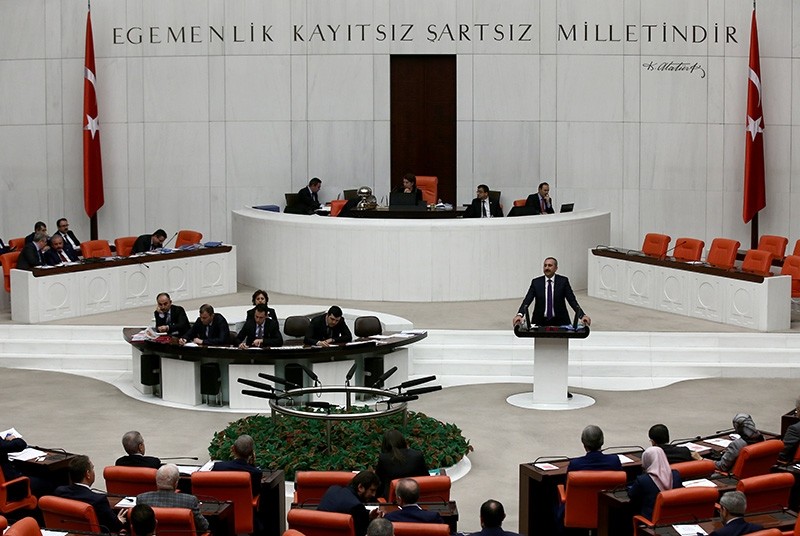 The alliance bill prepared by the ruling Justice and Development Party (AK Party) and the Nationalist Movement Party (MHP) was ratified Tuesday by Parliament after 20 hours of deliberation.

The 26-article bill, which was submitted on Feb. 21 with the signatures of Prime Minister Binali Yıldırım and MHP Chairman Devlet Bahçeli, will allow political parties to form alliances for the first time in Turkish politics.

According to the newly adopted bill, the current 10 percent national election threshold will remain for alliances.

This means that even if one of the parties in the alliance falls below the minimum threshold, if the total percentage of the votes each party receives passes the threshold, the parties would be able to claim seats in Parliament.

One of the most discussed issues was the distribution of votes given to the both parties in an alliance.

Each party's votes in an alliance will be calculated; if an electorate votes for the two parties in an alliance, the vote will not be invalid but considered as a single vote.

The distribution of votes given to both parties in an alliance will be determined according to each party's vote rates obtained only by themselves.

While in the past law enforcement could be only called to the polling centers by appointed officials, with the new alliance bill, citizens will be able to call the authorities themselves to inform about possible disturbances.

Meanwhile, the parties that decide on making an alliance are required to submit an application to the Supreme Election Board (YSK) within seven days following the announcement of the election calendar.

Additionally, the age of candidacy has been lowered to 18 for local elections.

During the discussions of the bill in a general session of Parliament, tensions had risen when the Republican People's Party (CHP) deputy Musa Çam made statements targeting MHP's chairman.

The AK Party and the MHP last month presented the bill to Parliament following weeks-long alliance negotiations for the presidential and parliamentary elections in 2019.

Bahçeli announced that he will not be a candidate for the presidential elections and instead he will support the re-election of President Recep Tayyip Erdoğan. Bahçeli has been stressing that AK Party and MHP have similar stances toward significant issues.

Following the MHP's decision, the two parties ramped up efforts to form an alliance which has a legal basis. President Erdoğan has also signaled that other parties might also join to the "National Alliance."

Great Union Party (BBP) Chairman Mustafa Destici has been stressing that his party supports the alliance.

Commenting on the underlying reason of the support to MHP and AK Party, Destici told Daily Sabah previously, "We support it because of the system change they have implemented. We are together with the AK Party and MHP because we believe the change in the system of governance is beneficial for Turkey."

The presidential and parliamentary elections will be held in November 2019 under the new presidential governing system.

Following the ratification of the alliance bill in Parliament, the MHP and AK Party's joint committee is expected to focus on the adjustment laws for the new governing system.