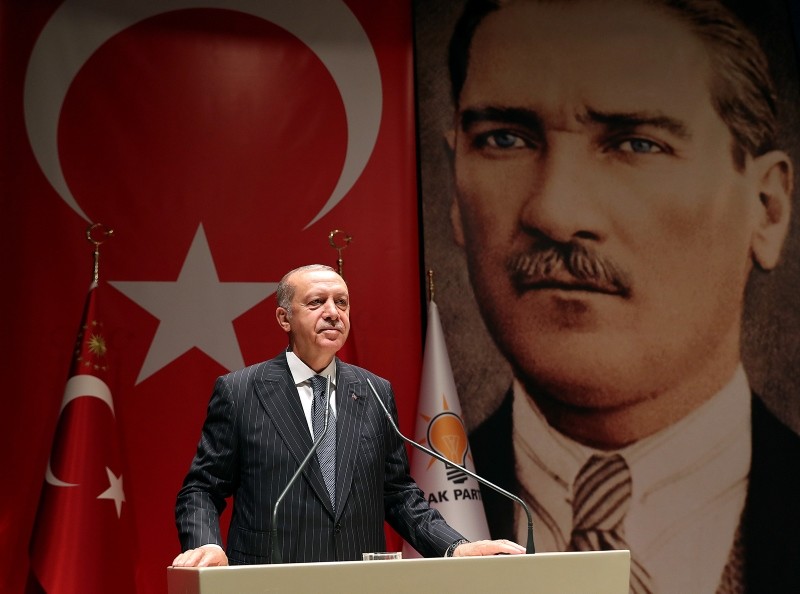 President Recep Tayyip Erdoğan said Friday that the electoral alliance between his Justice and Development Party (AK Party) and the Nationalist Movement Party (MHP) will continue in Parliament, a day after the opposition's alliance fell apart.

Speaking at the a meeting of provincial chairmen at the AK Party headquarters , Erdoğan said the alliance formed for the June 24 elections will continue because of the seat distribution in Parliament and the current conditions in Turkey.

According to the final election results announced by the Supreme Election Board (YSK) on Wednesday, the AK Party gained 295 seats in the 600-deputy parliament with 42.56 percent of the votes and the MHP gained 49 seats with 11.10 percent. The People's Alliance have 344 seats, which make up an absolute majority but falls 56 short of 400 deputies required for constitutional amendments and six short to bring constitutional amendments before the public in a referendum.

"We will look after this unity with the belief to offer good services to our country and nation, unlike those who cannot keep their alliances," Erdoğan said, referring to the opposition's Nation Alliance, which completed its lifespan as of Tuesday, according to the statements of officials from the Good Party (IYI Party - IP) and the Felicity Party (SP). On Wednesday, the main opposition Republican People's Party (CHP) also confirmed the termination of the alliance, which has 189 seats in Parliament with 33.95 percent of the votes, in addition to the Peoples' Democratic Party's (HDP) 67 seats with 11.7 percent of the votes.

Erdoğan also criticized the CHP for supporting the pro-PKK HDP, accusing the CHP of steering some of its voters to the HDP to enable it to pass the 10 percent threshold.

"We invite all CHP sympathizers that love their country, nation, republic and state to bring their party administration into account for this shame," he said.

"If the CHP does not make this settlement within itself, this bond between the separatist group and the main opposition party will transform into, I underline this, a fundamental one, rather than something purely tactical," he said.

"Both this nation and history will bring into account those who made Turkey's oldest party a toy for a group of marginals in the West and a handful of terror organization leaders abroad," he added.

Erdoğan noted that the AK Party will analyze the 10 percent gap between presidential and parliamentary elections.