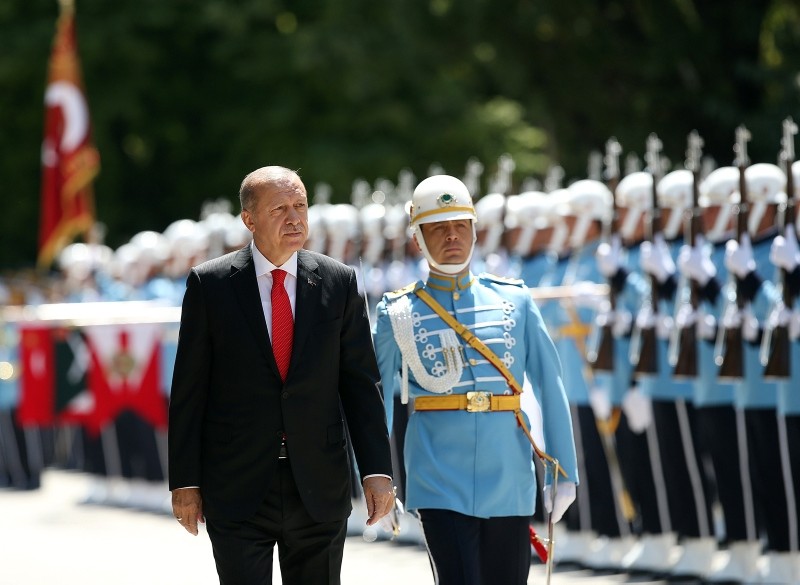 President Recep Tayyip Erdou011fan inspects the ceremonial guard upon his arrival to the Grand National Assembly of Turkey, in Ankara, July 07, 2018. (AA Photo)
by daily sabah
Jul 07, 2018 12:00 am

The first presidential decree will be issued Monday, President Recep Tayyip Erdoğan said Saturday, adding that the new cabinet will be revealed at 09:00 p.m. (1800 GMT) local time the same day, right after the presidential oath-taking ceremony and another ceremony that will switch the country to a executive presidency model.

Erdoğan arrived in the parliament on Saturday for the deputies' oath-taking ceremony, which is expected to be the longest ever as the number of deputies has increased from 550 to 600.

Before the ceremony, Erdoğan addressed the parliamentary group of his ruling Justice and Development Party (AK Party). In his speech, Erdoğan said that the new cabinet will hold its first meeting on Friday.

Erdoğan said that Turkey is determined to eradicate the terror threat. "We won't stop until we completely wipe off terror from our borders. The operations will continue until the PKK terror group is removed from Qandil and if needed from Sinjar," he said.

"We are observing that the powers which have been supporting terror groups in our region for a long time have understood Turkey's decisiveness in the war against terror, and have started to seek ways of reconciliation," he added, in reference to the deal between Turkey and the U.S. to jointly control Manbij district in northern Syria and the removal of PKK terrorist group's Syrian offshoot People's Protection Forces (YPG).

"We will take our country much further by solving the structural problems of our economy, starting with the current account deficit, inflation and high interest rates," he added.

Istanbul deputy Mustafa Şentop was also elected as deputy parliament speaker. The parliament is expected to elect a speaker on Thursday, and then goes on holiday between July 15 and October 1. Prime Minister Binali Yıldırım is expected to be nominated by the AK Party.

Turkish deputies are scheduled to convene at 2 p.m. (1100 GMT) on Saturday to take their oaths of office in the 600-seat parliament, two weeks after presidential and parliamentary elections on June 24.

Incumbent President Recep Tayyip Erdogan won re-election on June 24, gaining also the expanded powers of an executive presidency, including the ability to rule by decree, as passed in a constitutional referendum on April 16, 2017. Erdoğan becomes both the head of state and government, with the prime minister's post now abolished under the new system.

Erdoğan also told the ruling AK Party's parliamentary group to correctly evaluate the "fine tuning" made by the Turkish nation during the June 24 elections. Erdoğan, who won the presidential race with 52.6 percent of the votes, said: "Our nation made AK Party the winner, but our party could not achieve its target.

"We should correctly evaluate the fine tuning made by the nation in the ballot boxes."

According to the official results announced by Supreme Election Council (YSK), AK Party received 42.56 percent votes (295 seats). In the presidential vote, Erdoğan received 26,330,823 votes. Out of the 59,367,469 registered voters, 51,197,959 had cast their ballots for presidential elections, meaning the turnout stood at 86.24 percent.

Erdoğan said Turkey would enter a new period with the presidential swearing-in ceremony on Monday. He also said 22 presidents, 17 prime ministers, deputy presidents and parliament speakers would attend the ceremony.

The June 24 vote marked Turkey's transition to an executive presidential system of government, doing away with the prime minister's post, among other changes.