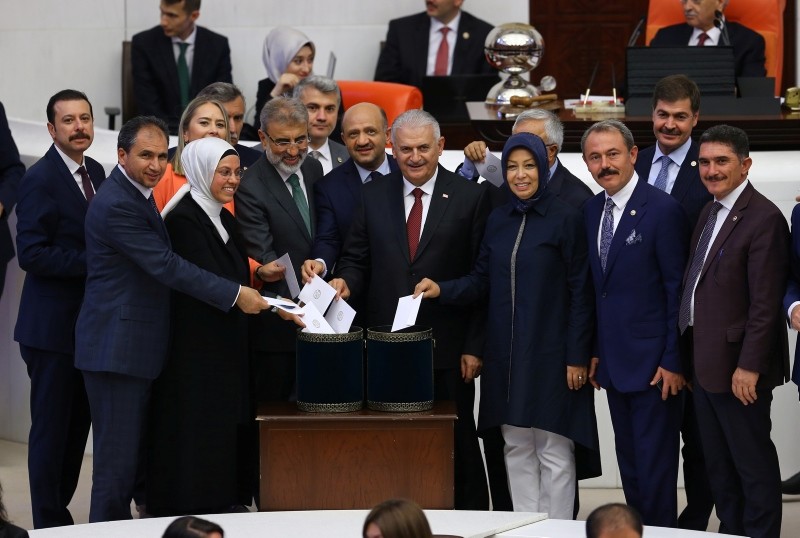 Former PM Binali Yu0131ldu0131ru0131m casts his vote for the parliament speaker election alongside AK Party deputies in the second round of voting. (AA Photo)
by Daily Sabah with AA Jul 12, 2018 12:00 am

In accordance with the Turkish Constitution, the election of the speaker is being conducted via secret ballot. In the first two rounds of voting, at least 401 out of 600 deputies' votes are needed to win.

President Recep Tayyip Erdoğan, in Belgium for the NATO summit, called Yıldırım on Thursday to congratulate him on his election.

Yıldırım has served as the country's final prime minister until earlier this week, when the post was abolished under constitutional changes. The Nationalist Movement Party (MHP) has announced that it will support the AK Party candidate.

CHP has nominated Toprak, a onetime youth and sports minister and a lawmaker from the Istanbul province, for the post of Parliament speaker.

IP candidate Nuhoğlu, born in 1953, is also a lawmaker from Istanbul.

HDP candidate Beştaş, born in 1967, is a lawmaker from the southeastern Siirt province.

SP candidate Islam is a lawmaker from Istanbul.

Yıldırım has been considered to be the preferred name for the post given his positive personality and good sense of humor, which might prompt more dialogue and reconciliation in Parliament.

Having served the country as the transport, maritime affairs and communications minister in the 58th, 59th, 60th, 61st and 64th governments, Yıldırım became Turkey's prime minister in May 2016. With the constitutional changes approved in the April 16, 2017 referendum, which envisaged a new executive presidential system, it was decided that the prime ministerial post would be abolished. Turkey officially switched to a presidential system with the June 24 elections.

According to Turkish state protocol, the Parliament speaker is the second-highest ranking government official. The current Parliament speaker Ismail Kahraman, who served for two terms, did not seek another term due to his advanced age and health problems.

All rounds of the voting will be successively held. In a third round of voting, a minimum of 301 votes is needed. If a fourth round is necessary, the candidate with the largest number of votes is elected.