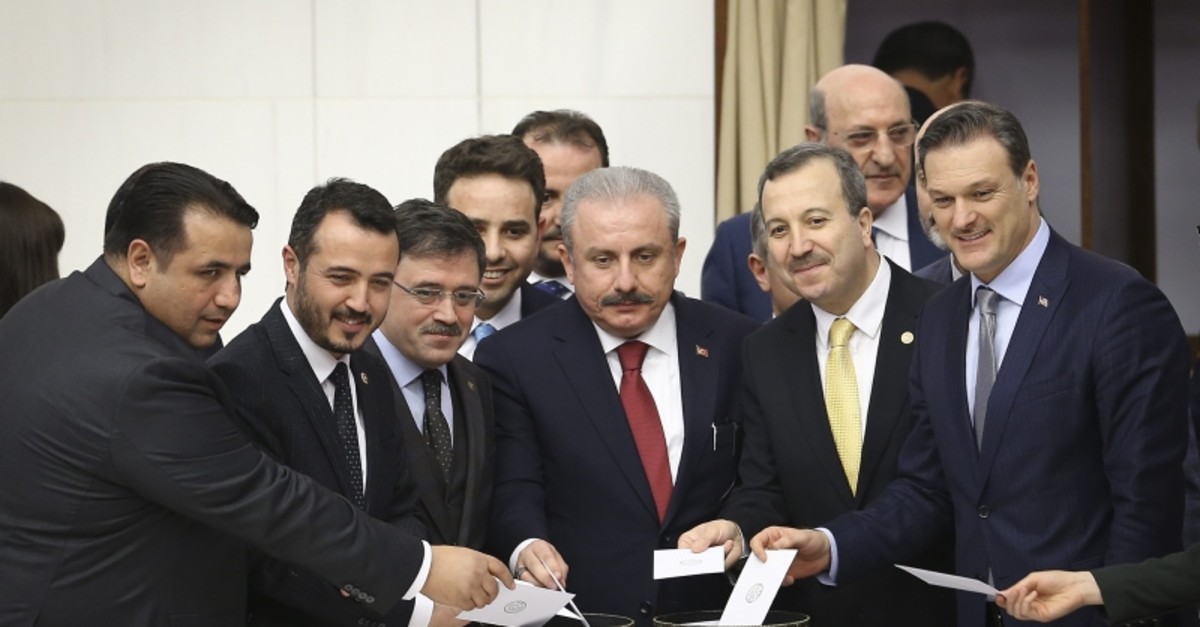 Şentop was nominated by AK Party after the previous speaker Binalı Yıldırım resigned from his post to participate in the upcoming local elections.

Şentop won in the third round by receiving the majority of the votes.

In accordance with the Turkish Constitution, the election was conducted via secret ballot.

In the first two rounds of voting, at least 401 out of 600 deputies' votes are needed to win, while in the third round of voting, a minimum of 301 votes is needed.

If a fourth round is necessary, the candidate with the largest number of votes is elected.

President Recep Tayyip Erdoğan said Sunday at a rally in southern Hatay province that the People's Alliance of his ruling AK Party and the opposition Nationalist Movement Party (MHP) earned a "grand victory" with the election of Şentop.

The presidency released a statement saying Erdoğan called Şentop to congratulate him on his election. Erdoğan also called MHP leader Devlet Bahçeli to thank him for his party's support in the election.

On Friday, Şentop submitted his candidacy petition following his election by party members as the party's candidate in a secret ballot and resigned from his posts as Tekirdağ deputy of the AK Party.

Born in northwestern Tekirdağ province in 1968, associate professor Şentop graduated from Istanbul University's law school. He later completed his postgraduate and doctoral studies at Marmara University's Faculty of Law where he also worked as a research associate.

Şentop held the Istanbul presidency of the Economic and Social Research Center (ESAM). He served as AK Party deputy chairman between 2012 and 2015, the party's Istanbul deputy in the 24th, 25th and 26th governments and was the head of Parliament's Constitutional Committee in the 26th government. He currently serves as deputy speaker of Parliament. Şentop was also one of the masterminds behind last year's constitutional change and alliance bill.

Yıldırım, AK Party's Istanbul mayoral candidate, resigned from his post on Monday in accordance with Turkish law to participate in upcoming local elections on March 31.