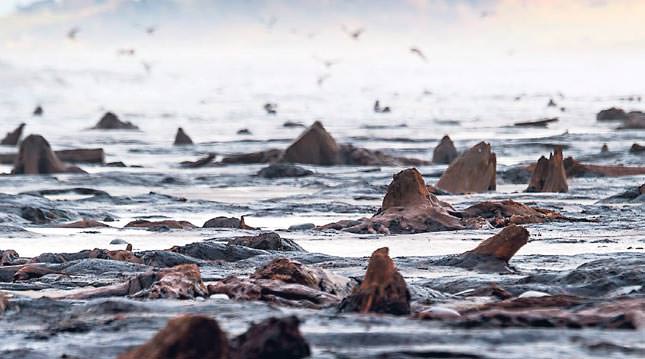 At home, extreme weather in the form of drought is exposing long-submerged cemeteries and churches. Abroad, in the U.K., floods are exposing ancient forests

Extreme weather conditions, whether heavy rainfall or lack thereof, have exposed what nature and history have been hiding from modern eyes in recent months. Internationally, ancient forests were found across the U.K.

In Turkey, a basilica was found in Iznik and most recently an ancient cemetery found in Kastamonu.

The water level at Karaçomak Dam, located in the province of Kastamonu, fell to six million cubic meters this winter from its normal annual 23 million cubic meters due to a draught that has been threatening Turkey's drinking and agricultural water supply. The dam is now at 19 percent capacity with a field equaling to 16 football stadiums completely desiccated.

The immense drop exposed the remains of a previously unknown cemetery. The epitaphs on the tombstones were written in Arabic. Investigators were not able to determine to which century or period they belonged due to damage.

Locals also reported many tombs were destroyed and the cemetery was a mixed cemetery consisting of tombs of men, women and children.

Locals said they were shocked and found the whole incident very worrying since the dam was providing drinking water for the province.
Drinking water is currently being provided to the province from other resources.

The news came amid worries that Kastamonu will be left with no water within five months, a growing worry in many places around Turkey. The dam located in Adana, one of the southernmost cities in Turkey, only received about 398.2 kilometers of rainfall per square meter, significantly below normal rainfall.

The cemetery in Kastamonu is not the first to be found in such circumstances. About a month ago, Seyhan Dam Lake's waters receded about 500 meters, revealing the cemetery of the Topalak village. Seyhan Dam was built in 1956 and submerged cemeteries of various villages.

The villagers who were informed of the news came to the site to visit the graves of their relatives unseen in nearly six decades.

Back in January, the remains of an ancient basilica was discovered about 20 meters away from the shores of Iznik Lake in Bursa, according to local archeologists. The ancient church was planned as a basilica with three naves, said Mustafa Sahin, an archaeology professor at Bursa Uludag University, "This church's remains are similar to the Hagia Sophia in Iznik," he said. "This is why we estimated that it was built in the fifth century A.D." The structure's coastal side collapsed possibly in an earthquake as Iznik is located on a fault line and had gone through various earthquakes. The basilica was submerged and never rebuilt.

The structure was discovered from the air during a trip to take inventory of the region's historical and cultural artifacts. Upon discovery, Bursa University immediately informed the Iznik Museum Directorate and the Culture and Tourism Ministry, asking that the archaeological site be protected, Sahin said.

On the other side of Europe, in the U.K., global warming had the opposite effect as floods and storms battering the island this winter. Yet, the extreme weather had similar results. The remains of ancient forests were uncovered after storms shifted huge quantities of beach sand in Cornwall and Wales. Tree stumps and roots, possibly dating back to the Bronze Age, became visible for the first time in the Mid-Wales village of Borth. Large trunks of oak, beech and pine also became visible in various Cornish beaches, including Mount's Bay near Penzance, where the so-called "submerged forests" were revealed. Geologists used radiocarbon dating to determine the age of the forest. Frank Howie of Cornwall Wildlife Trustee noted that the sea level has risen for the first time since the last glaciation and the submerged forests were evidence of such change in the bay area.