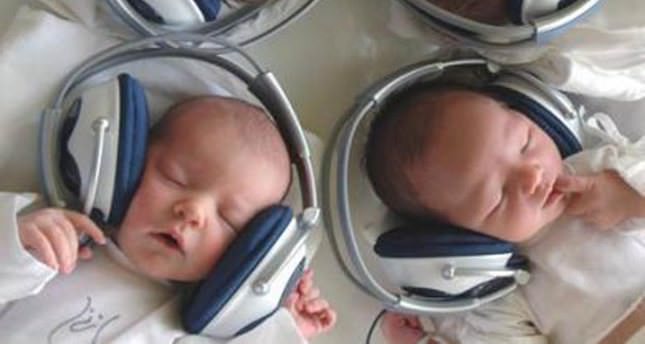 ISTANBUL – Music is an indispensable part of life, enabling us to express our feelings and thoughts. Clinical psychologist Nalan Pulat Gölcüklü from Bursa Medical Park Hospital explained how music contributes to an infant's mental and emotional development. She informed us about the impact of music on brain and cognitive processes. Influence on Mental Development.

Music has an impact on infant development and notably contributes to the cognitive process. It is reported that the impact of music on a baby starts in the mother's womb. The auditory system in the human fetus starts to develop at 21 to 22 weeks of gestation. By age three, 80 percent of brain development is com- plete and by age eight, 85 percent of mental development is reached. In the course of this period, music is the most important factor with a positive impact on brain and cognitive processes.

It is believed that music is exercise for the infant brain. For instance, listening to music may help a baby comprehend which sounds are similar to others. Music accelerates the development of comprehension and anticipation. Furthermore, it improves an infant's creative and mathematical intelligence. In addition to the development of human intelligence, listening to music enables a baby to acquire a sense of responsibility, fast problem-solving and systematical thinking.
Influence on emotional and mental development

Plato says: "Music and rhythm find their ways in the secret part of our soul." With respect to the common saying "music feeds the soul," Professor Erol Belgin states: "Feeding our soul, music transfers aesthetical impulses to the brain and makes the sounds extraordinarily dynamic. Music stimulates some hormone levels, including endorphins, and causes the widening of vessels with a decrease in blood pressure. The body then feels relaxed or excited."

Influence on auditory and language development

The fetus begins comprehending spoken words and sounds after 27 week of gestation. It is therefore suggested that language development begins in the course of the pre-natal phase. Music reportedly has a positive impact on the auditory system and language development.

Influence on psychomotor and physical development

It is widely known that music stimulates an infant's movements subsequent to birth. In connection with physical development, the auditory sense of a new-born is significantly developed. A baby can respond to lively music with coherent movements, which in turn has a positive impact on psycho-motor and muscle development.

Listening music has an important role in an infant's emotional and mental development. In particular, classical music notes are reported to stimulate the brain. Some researchers suggest that the IQ levels of babies who listen to music are five points higher than those who don't listen to music. Furthermore, classical music allegedly has a direct positive influence on a mother's mood. The mental development of a fetus is also believed to feed a mother's wellbeing.

By causing excretion of the happiness hormone, listening to music reduces stress levels.

According to some researchers, babies remember the lullaby or music they listened to in their mother's womb. Music controls heartbeats and makes babies feel more relaxed. It also gives energy to new- borns. Even a crying baby may become relaxed by listening to music. Finally, music acts as a natural sleep stimulant.
Last Update: Mar 28, 2014 7:11 am
RELATED TOPICS