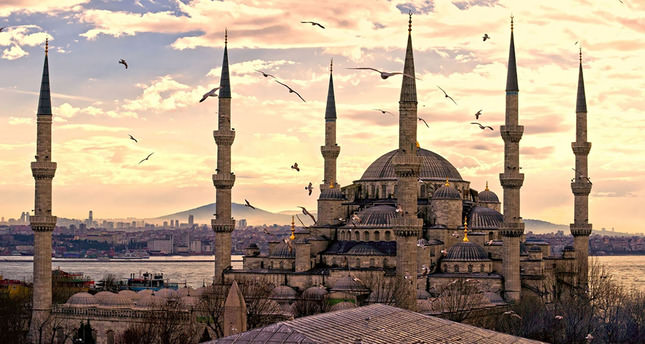 by Anadolu Agency Apr 09, 2014 12:00 am
Istanbul has topped the "Top 25 Destinations" list on TripAdvisor, the world's biggest travel website.

Rome, London, Beijing, Prague, Marrakech, and Paris followed Istanbul on the list, which is based on user comments and ratings.

Updated for a sixth time this year, it takes into account travel opinions published within the space of a year on touristic places, hotels, and restaurants.

Istanbul has emerged as the top destination in a ranking that serves as a barometer of the most popular travel hotspots trending around the world in 2014.

The largest city in Turkey has pulled off an impressive feat in the sixth edition of TripAdvisor's Travelers' Choice Destinations 2014 report, leapfrogging 11 places from last year and knocking Paris off its perch.

In fact, not only did Paris lose its standing as the top travel destination this year, but the City of Light fell a punishing six spots to seventh position after a year of bad publicity. Last year, an incident in which a group of Chinese tourists were robbed right after landing in Paris received international media attention, spurring the city to boost security measures and distribute etiquette manuals to restaurateurs, taxi drivers and sales staff in an effort to shed their 'rude' image.

Another big mover this year is Beijing, which moved up 17 positions to catapult its way into fourth spot. The jump is part of a larger trend among TripAdvisor users, who gave six of the top 25 spots to Asian cities.

Rounding out the top five destinations after Istanbul are Rome, London, Beijing and Prague.

The final ranking is compiled using an algorithm that combs through millions of reviews and takes into account the quantity and quality of ratings for hotels, attractions, restaurants and destinations around the world over a 12-month period.

Meanwhile, though Paris may have fallen out of favor among TripAdvisor users, the French capital maintains it was the world's top tourist destination last year, attracting 32.3 million tourists based on hotel occupancies.

When it comes to foreign visitors, the city also drew 15.5 million tourists last year, up 8.2 percent compared to 2012.

Here are the top 10 destinations in 2014 according to TripAdvisor: