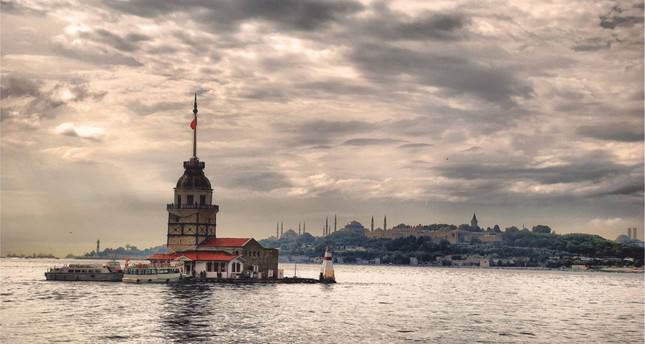 Take a trip to Istanbul's "Üsküdar," on Asian side of Turkey for a stroll around a serene park or visit one of the city's most famous museums to capture the essence of beauty and tranquality

ISTANBUL — On the Asian side is the popular residential and commercial district of Üsküdar. This seaside suburb is just one example of the fusion of old and new. Home to many residents and tourists who wish to explore, Üsküdar has numerous cozy cafes and great restaurants serving delicious dishes and treats.

- Mosques With around 180 mosques in Üsküdar, prayer time becomes a symphony of adhans with each mosque competing to be heard. Among the many mosques in Üsküdar, there is one in particular that you cannot walk past without being hypnotized by its astounding beauty. The Mihrimah Sultan Mosque, also known as the İskele (Pier) Mosque, was built in 1548 by the famous Ottoman architect Sinan.
The masterpiece stands solidly next to Şemsi Pasha Mosque, built in 1471 for the Grand Vizier. Üsküdar is also home to numerous synagogues, as well as Greek and Armenian churches.

Amid these marvelous structures is the striking Surp Krikor Lusavoriç (Saint Gregory the Illuminator) Armenian Church.

- Kız Kulesi Another distinctive landmark is the Kız Kulesi, or Maiden Tower, a small island off the shores of Üsküdar.

Legend has it that an emperor had a daughter whom he loved dearly and one day an oracle prophesized that on her 18th birthday a venomous snake would bite her and cause her death.

Not willing to take a chance and see his daughter's early demise, the emperor built a tower in the middle of the Bosporus hoping to protect her from the creatures that crawl the land. On the princess' 18th birthday, delighted that he had prevented the prophecy from materializing, the emperor brought his beloved daughter a basket of exotic fruit. Upon reaching into the basket, however, an asp that had been hiding among the fruit bit the young princess and she died in her father's arms, just as the oracle had predicted and hence the name Maiden's Tower.

Spread over two floors, this tribute was built in 1854 during the Crimean War in which Florence Nightingale developed revolutionary nursing methods to aid wounded soldiers. The lamp she held that gained her the title of "lady of the lamp" is also on display here.

- Çamlıca Hill A breathtakingly magical place in Üsküdar is Çamlıca Hill. You don't need a loved one's eyes to gaze into because the views will hypnotize you and demand your full attention. An escape from city life, Çamlıca is simply breathtaking. It is split in two hills, Küçük Çamlıca (Little Pine Hill) and Büyük Çamlıca (Big Pine Hill), and each is as beautiful as the other for its own reasons. The highest point reaches 267 meters above sea level and provides panoramic views of Istanbul.

The brightly colored tulips planted in celebration of this month's tulip festival are out in full blossom, providing a picturesque scene among cafes, restaurants and stalls.

- Çinili Hamam After a day of overwhelming exploring, you can relax at the Çinili Hamam which is also known as Eski Hamam or Old Hamam. Commissioned by Kösem Sultan, it was built in 1640 and is considered one of the most historic Turkish baths. The fountain at the entrance, marble slabs and glass partitions give it an authenticity that can only be found in Turkish baths. With first class service, you can be sure you will step out feeling light as a feather after having received royal service.