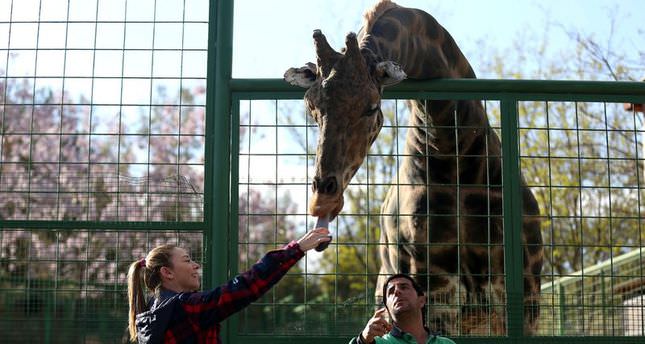 Şakir the giraffe and the officials at the Gaziantep Zoo are patiently waiting for a female giraffe to come from Canada. Officials said their search for a suitable match for Şakir would depend on the ongoing negotiations with a zoo in Canada

GAZİANTEP — Gaziantep Zoo's Şakir is patiently awaiting his match from Canada, as the Gaziantep Zoo continues its years-long search to find him partner.

The giraffe was brought to the zoo, which opened in Burç Forest in 2001, when it was only a year old. Due to the fact that giraffes rarely bare females, the zoo's officers have not managed to find any female match for Şakir; however negotiations are underway to find him a partner from Canada.

The head of the zoo's Support Services Department, Celal Özsöyler, said the Gaziantep Zoo was the biggest in Turkey in terms of field width and number of species. It is also the second biggest zoo in Europe and the fourth biggest in the world.

Özsöyler noted that there are almost 300 species and more than 7,000 animals in the zoo. He further indicated that two years ago the zoo's management took steps to find a female match for Şakir, however they were not successful. "We are seeking a female match for Şakir, transferred from the Ankara Zoo. The giraffe is now 13 years old. The life span of giraffes is around 20-25 years.

Male giraffes reach puberty when they are three years old. I hope we will finalize the negotiations with Canada to bring a suitable match,"
Özsöyler said.

Şakir drew much attention as actress Ece Uslu fed Şakir a fig during her visit to the zoo. Featured in an episode of the Turkish TV series "Karagül," located in the Halfeti district of Şanlıurfa, Uslu enjoyed posing for photographs with Şakir, who boasts a 45-centimeter-long tongue.
Last Update: Apr 15, 2014 1:20 am