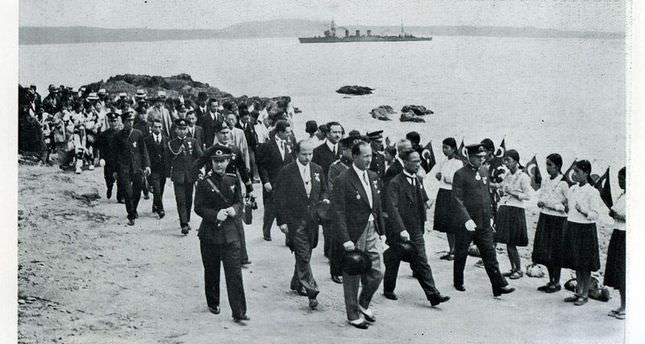 ISTANBUL — Princess Akiko paid an official visit to Istanbul yesterday where Culture and Tourism Minister Ömer Çelik presented her with an album of 50 photos of the Ottoman frigate "Ertuğrul," which sank in 1890.The album includes photos of the ship, its crew, the injured being treated, the Ertuğrul cemetery in Japan and the Japanese emperor's visit to the cemetery in 1923.

The original mission was ordered by Sultan Abdulhamid II after a relative of the Japanese Emperor came to Istanbul in 1887. The Ertuğrul frigate set off with a crew of 609 people in July, 1889. Fifty-six commissioned officers were on board the ship carrying an Ottoman military decoration embroidered with jewels to the Japanese Emperor.

The frigate made numerous stops during the journey and arrived at the Port of Yokohama to a spectacular welcome after 11 months on June 7, 1890. Officers stationed on the ship gave concerts to boats surrounding it on Japanese waters over the course of its stay. After three months, the frigate was ready to return.Although the Ottoman delegates were warned about the upcoming storm, the frigate set sail from Yokohoma to Istanbul on Sept. 15. Caught by the typhoon, the Ertuğrul sank off Kushimoto.Only 69 sailors were rescued.

A cemetery was constructed in 1891 in Kushimoto with a memorial dedicated to those lost in the accident. The Japanese Emperor famously visited the cemetery on June 3, 1923.Every five years, a commemoration is held in front of the memorial. Established in 1974, Kushimoto's "Turkish Museum" features the model of the frigate along with statues and the photographs of commanders.
The town of Kushimoto and the district of Yakakent in Mersin are recognized as sister towns.