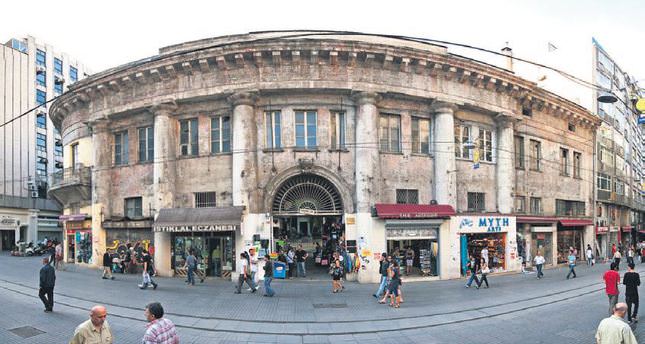 by Daily Sabah May 01, 2014 12:00 am
ISTANBUL — With tourists flocking to the streets of Istanbul, foreign investors have turned their attention to Istanbul's historic inns and Turkish baths (hamams) The $57 million (TL 120.57 million) purchase of Narmanlı Inn has become a milestone for historic inns and hamams.Real estate websites and newspapers are filled with advertisements for inns and Turkish baths that have been put up for sale by their owners. The prices range from $100,000 to $1 million.

In particular, foreign investors in the tourism sector are trying to take advantage of this trend since the number of tourists visiting Istanbul is on the rise. A significant number of customers compete with each other to turn historic inns, hamams, hotels and bazaars into trade centers. Narmanlı Inn is the most recent example. Built as the Russian Embassy in 1831, Narmanlı Inn has been out of use for many years. Mehmet Erkul, owner of Erkul Cosmetics, and Tekin Esen, owner of Eteksan Manufacturing, purchased the inn for $57 million last January.Narmanlı Han will be run as a boutique hotel.

Evliyahan, a 77 square meter inn, has been put up for sale by its owner, priced at $5.7 million. The two-star Evliyahan is located in the Örücüler Entrance of the Grand Bazaar - a famous Istanbul attraction. The inn can be used as a boutique hotel. Owner Rıdvan Alkan stated that up to 60 percent of maintenance costs can be reimbursed under the government fund.

The other real estate advertisement covers the historic hamam on sale in Balat. This hamam extends over 838 square meters and has 15 rooms with a capacity of 60 guests. Dating back to the reign of Mehmet the Conquer, the hamam is classified first-class after a regulation passed in 1871. Priced at TL 2 million, it is the oldest hamam in Istanbul.

Another hamam up for sale is located in Fatih, a district in Istanbul's historical peninsula. It has 15 rooms with a capacity of 150 guests. With an area of 800 square meters, the hamam is priced at $1.5 million. There are some other historic hamams on sale outside Istanbul.
A 200-square-meter Turkish bath located in Bartın is priced at TL 100,000.