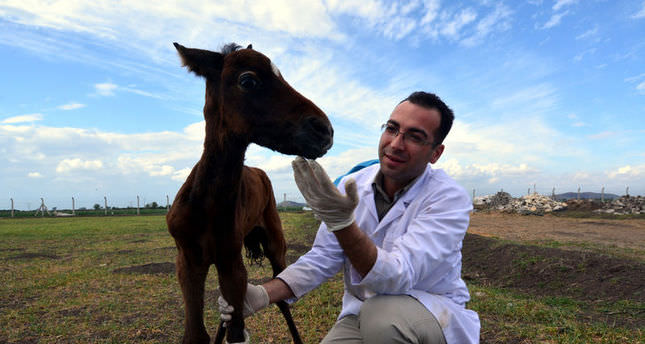 by AA May 01, 2014 12:00 am
OSMANIYE,Turkey — The injured foal left to its fate in a garbage container was treated at the animal healthcare and rehabilitation center upon the order of Osmaniye Metropolitan Mayor Kadir Kara. Found in the district of Toprakkale, the one-month-old foal was transferred to the healthcare center after some local residents informed the police. Following the first treatment, the badly injured foal was sent to the Veterinary Faculty of the Mustafa Kemal University in Hatay. It was diagnosed with traumatic joint injury on the left leg, infection in front and hind legs and extreme starvation. Following drug and wound treatment, the foal was returned to Toprakkale and will be kept under protection in a farmhouse for a week. The treatment will then continue at Mustafa Kemal University until the foal beings to walk again.

Veterinary physician Ali Laçinbaba at the Osmaniye Municipality Animal Healthcare and Rehabilitation Center said that the animal will receive physical treatment for a month once the support bandages are removed. "Veterinary physician Ali Nuri Yiğit, an executive at the Chamber of the Osmaniye Veterinary Physicians plans to gift the foal to his three-year-old daughter Ada Sonay," said Laçinbaba. Ada Sonay wants to name it "Minumus," after a cartoon character.