Trail over killing of leopard in Diyarbakır delayed 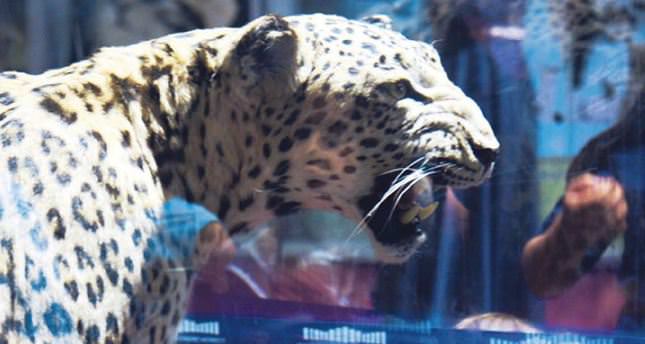 The trial of those behind the killing of a leopard in Diyarbakır in November 2013 was set to begin on Wednesday, but the court delayed the hearing and ordered that forensics reports be submitted as evidence

DİYARBAKIR — A lawsuit was filed against Kasım Kaplan and his cousin Mahmut Kaplan last November when they shot a leopard dead in the Çınar district of Diyarbakır province.

Kasım Kaplan had claimed that he shot the leopard in self-defense and showed some injuries and scratches on his body as evidence.
The case has gone to trial at the Çınar Criminal Court and a two- to five-year jail sentence has been requested by the prosecutor for "causing the extinction of a species through hunting or disturbing ecological balance."

The judge, who announced that he is a Greenpeace member, allowed various representatives from NGOs working for animal rights in Turkey to attend the hearing.

Representatives from Animal Rights Law Association of Antalya, Gaziantep and Ankara and from the Society for Protection of Animal Rights attended the trial on Wednesday as intervening parties.

According to Mahmut Kaplan's testimony the two cousins were in a rocky area grazing their herd at the time of the incident. "I heard a sharp sound and when I turned back I saw that a wild animal was attacking my cousin. During the struggle Kasım fell off a rock about 2 meters high and the leopard also fell down. Before the animal could get up and strike again, I shot him," said Kaplan. He further asserted that when he turned his back he saw that the animal had clawed Kasım's back and arm. "If I hadn't shot him he would have kept on attacking my cousin," said Kaplan.

Kasım Kaplan, the actual victim of the leopard attack, said he felt that something hit him in the back and fell from the rock. "I still have scars and scratches on my right arm and back," said Kasım as he showed the injuries on his arm to the judge and the prosecutor.

He also noted that because they didn't know what the animal was they took the corpse to the village to show it to the elders. "If I hadn't fallen down that rock the animal would have torn me into pieces," concluded Kaplan at the end of his testimony. Forensic files indicated that a single bullet was found in the animal's body and the autopsy records stated that the bullet might have been shot earlier than asserted by the defendants. The defendants and the intervening parties found themselves in a heated debate during the hearing. Lider Tanrıkulu, the lawyer representing Antalya Law Association, noted that due to the high amount of adrenalin released, leopards try to complete their attacks quickly and a leopard attack most often would result in the death of the person being attacked. "We think the defendant injured himself after he shot the animal. It would take him some time to take out the gun, prepare it and shoot," said Tanrıkulu.

Lawyers present at the meeting also noted that there were contradictions between the statements of the defendants and that leopards attack using four legs and not two. "The injuries on the body of the defendant and the natural leopard attack characteristics do not match. Leopard attacks mostly end in death or heavy injuries," said the lawyers.

The court ordered a crime scene investigation report be issued and letters sent to the Diyarbakır Municipality and Dicle University in order to check whether a leopard had been spotted in the area before. The medical treatment records of Kasım Kaplan will also be delivered to Forensic Medicine Institution to be examined. Tanrıkulu answered reporters' questions after the hearing and said the Antalya Law Association is closely following the case. "This is a violation of the Universal Declaration of Animal Rights. Killing an endangered animal should result in a prison sentence. The defendants' justifications are pointless. No one would be able to survive from a leopard attack without serious injuries.