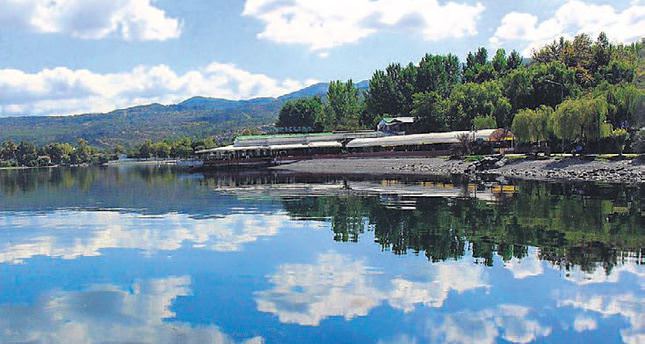 by Nur Özdil May 09, 2014 12:00 am
The Sapanca Lake is one of the important water resources in terms of water quality. Due to the recent drought conditions, the lake is experiencing a significant drop in water level. There is a 50 percent decrease in precipitation, which has worsened the l current situation. The water level is now lower about 2.10 meters because of the low tides between 50 and 100 meters.

The Sapanca Lake is now suffering from not only to natural, but also human damage. It is known as the natural breeding-ground of birds and fishes. Last month, a reed field of 350 hectares was burned. Two people were taken into custody with the accusation of ploughing and turning the area into a plant field.

A fire broke out on April 10 in the drought areas of the field due to unknown reasons.

A lot of bird nests were also burned. Police investigation are still being going on, however it was reported that 60 hectares of the field was attempted to turn into a plantation area. The General Directorate of Water and Canalization (SASKİ) in Sakarya informed that the field was ploughed by a tractor. The SASKİ made an official complaint. The suspects gave statements and were released following the verdict by the prosecutors.

In pursuant to the 7th article of the Regulation on "Protecting the Wetland Areas" enacted on April 4, 2014, filling and drying the wetlands are prohibited. In case of clearing the land, the responsible has to turn the land into the original form.