New evidence found in search for Süleyman I tomb 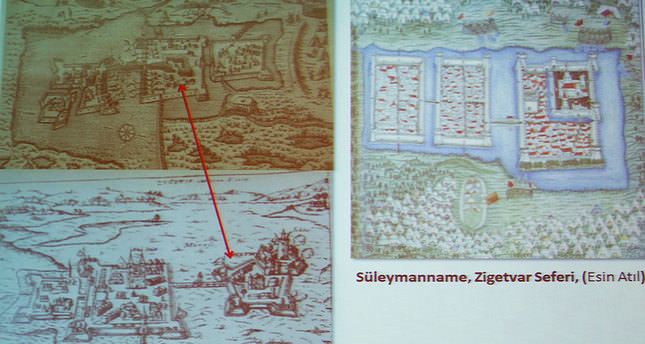 The capture of the castle took place shortly after Süleyman's death.

His death was kept secret in order not to demoralize the troops and to prevent disorder. Therefore only Süleyman's innermost circle, including Sokullu Mehmet Pasha, grand vizier of the sultan, knew of his demise.

In order to preserve the Sultan's body his heart and internal organs were removed and buried under the imperial tent near the castle and his body was embalmed. The body then waited there for 48 days until Süleyman's son, Selim II, came to the area to assume the throne and have the body escorted back to Constantinople.

Since Süleyman's death 448 years passed, but the site of his tomb has never been found. However, now two Turkish professors, Hamza Keles and Mehmet Zeki Ibrahimgil, believe they have discovered new leads.

"We've discovered the findings by chance during our research of monuments in the Balkans, which has been ongoing for 25 years," Mehmet Zeki İbrahimgil, a history professor at Gazi University said during a press conference in Turkey's capital, Ankara.

The findings are based on a charter which was found in the archives of the government and general directorate for foundations. According to the charter, the internal organs of Süleyman were buried in the garden of a mosque named Kanuni in Szigetvar.

The Kanuni mosque is still there, but Süleyman's tomb, which was supposed to have been built in 1568, two years after his death, was demolished in 1693 after the Ottoman Empire lost possession of the castle in Szigetwar.

"The tomb, where the internal organs were believed to have been buried, should be in front of the mosque," Hamza Keles, another professor said, adding "We hope to start excavation work there soon and hope to find the tomb."

Some Hungarian researchers who have looked into the mystery of Süleyman's tomb believe it was located under the Saint Marie Church at Turbek Hill, 3kms northeast of the castle of Szigetvar, but there is no evidence to prove this theory so far.

Süleyman, also known as 'the lawmaker' because of his complete reconstruction of the Turkish legal system was a prominent monarch of 16th century Europe.