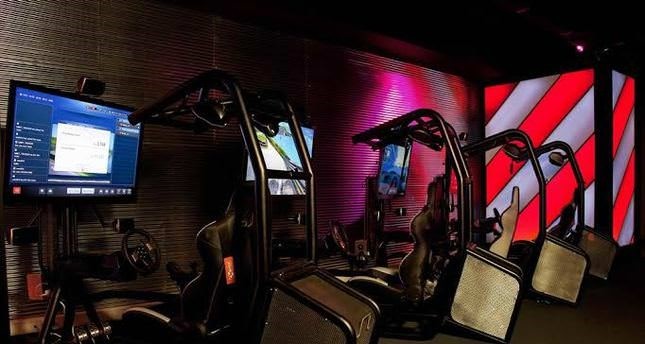 We are all still kids at heart contrary to what our outer appearance may say. The Game allows you to reconnect with that playful you by allowing you, even if for a few hours, to sing and play to your heart's content

In the heart of Istanbul is a place where you can escape the hustle and bustle of the city and escape the blistering sun by entering a cool, dark, timeless space, known as The Game for Big Kids, a gaming café and arcade housed in the Point Hotel, Barbaros.

The Game for Big Kids (The Game) is an unprecedented digital entertainment center with a capacity for 300 people to play the latest digital games simultaneously and is located in a 1,500-square-meter underground level of the Point Hotel, Barbaros in the heart of Istanbul's highrise district. I recently had the pleasure of staying in this impressive hotel, which not only houses a modern Istanbul gift shop but also a Sahaf, otherwise known as an Istanbul Library, which has a collection of 3,000 historical books on the Ottoman and Byzantine Empires, Istanbul and traditional Turkish arts and also has an entire underground level designated for The Game.

Although I have never gotten into gaming, and sort of missed the whole PlayStation era, on one excruciatingly hot day in Istanbul I decided to take the elevator down to the underground level that houses this luxurious arcade.

The elevators open up to a cool and dark space with colorful lighting and rows and rows of high tech consoles. Immediately upon entering the room I could see a huge Just Dance XBOX stage with four friends in their 20s onstage mimicking the dance moves of their corresponding character on the screen.

Each character had a different theme a n d a corresponding dance, such as a cowboy doing a hoe down and disco and hip-hop dancers doing their thing, but in perfect synchronicity. The group was having a blast, and I couldn't help but think how great it was that these four friends could just get on stage and immediately start doing a considerably decent choreographed dance in the middle of the afternoon and the middle of the city all thanks to gaming technology.

What excited me the most about The Game was the various sections devoted to music games and karaoke. Special studio rooms were set up to play Guitar Hero or Band Hero, which virtually gives you the chance to try being a rock star by singing and jamming in the privacy of a soundproofed room. I imagined gathering a group of friends and trying out various instruments as if we were in a band or simply hanging out in a private karaoke room for up to eight people with 10,000 songs to choose from.

Another great way to enjoy The Game with friends is to visit the "pit-stop," which is an area with seven racing simulators all with the latest technology to make you really feel like you are taking a whirl on a racetrack. Friends can race one another onscreen from their own driving console.
The Game has the world's newest and most popular game consoles all with the latest technology, including 21 PlayStation 3 consoles as well as FIFA 14 and 15, Pro Evolution Soccer and a number of Nintendo Wii's fit and balance board towers, which are not only great for exercising, but allow you to also give sports such as snowboarding and skateboarding a try.

Not only is it a great way to combine fitness with digital gaming, but also the various special areas set up for games in the underground area allow visitors the chance to play a number of new sports they may otherwise never have the chance to try. For example, try target practice in FP Shooting games that are set up in a special shooting range area, the décor of which was taken straight out of the setting of games such as Call of Duty and Counter-Strike. Or you could give boxing a try in your own boxing ring. There is also a special tennis court big enough for doubles to play the game Top Spin on.

The Game also has a full menu of sports bars, finger foods, a DJ setup and a row of classic dartboards. It is the perfect place to hold an event such as a birthday party for children, adults or for corporate organizations and they also host their own theme nights on certain occasions. Members of the staff are all gaming-lovers and experts and are extremely knowledgeable and helpful.

They made me feel welcome and comfortable even though I was a complete novice on digital games when I visited. They set me up at one of the racing consoles and talked me through the extremely life-like game, even consoling me when I suffered an inevitable yet still exhilarating crash.
I can definitely understand the thrill of digital games, which are now so lifelike you get the adrenaline rush usually saved for amusement parks.

Paying a visit to The Game was a unique experience and a perfect escape from the hot sun and noisy city. The environment, with its dramatic lighting and décor makes for a very luxurious place for gamers of all ages to enjoy doing what they love in an environment they can share with their friends.