Doğan apartments: A diamond in Galata 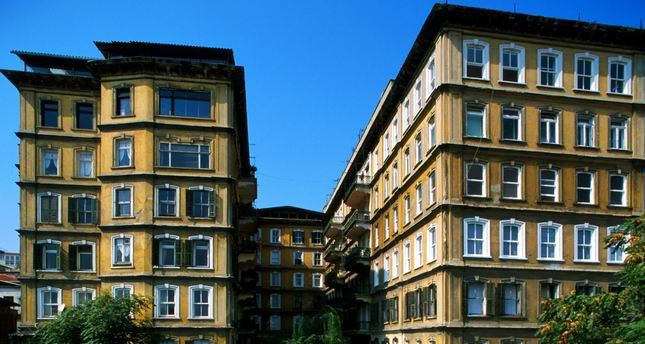 The Doğan Apartments, the yellow U-shaped building that originally began as an embassy located in Galata, was constructed in 1895, making it one of the earliest multi-storey buildings in Istanbul

Galata is the new Soho of Istanbul with its art galleries, creative shops, fashion studios and upscale restaurants. In recent history, it was a neglected and forgotten place where one didn't necessarily feel safe even though the abandoned, lonely wooden buildings always had an aura straight out of history books.

There are a few major landmarks in Galata: Galata Tower, Kamondo Stairs, the German High School and the Church of Saints Peter and Paul. The Doğan Apartments is a yellow u-shaped building and has a very adventurous history that began as an embassy and is now an apartment that everybody dreams to live in.

Walking along Serdar-ı Ekrem Street toward the end of the street at number 56, there is yellow façade - and sometimes the huge, dark-colored main door is open. Then there is another door but this time it's white and furnished with multi-color stained glass window. Push it gently to reach the real beauty - a green courtyard with overhanging wrought iron balconies. Behind the beautiful green garden lies the brilliant blue of the Bosporus. It is not an unfamiliar place as the Doğan apartments have been the setting for some famous movies like "Muhsin Bey," "Eşkiya" and a music video by MFÖ, "Deli Deli Kulakları Küpeli."

In the 1860s, the then minister president of Prussia, Otto von Bismarck, ordered an embassy to be built in Istanbul. In those days, there was a double storey building there that was built in the style of an Ottoman mansion and had a garden. Then the embassy moved and in 1890, the Belgian Helbig family built the Helbig Apartments, which is now the Doğan Apartments.

In 1919 following World War I, the building was sold at an auction to an Ottoman business man, Mair de Botton Efendi - until 1929 the building was called Botton Han. After 1929, because of the loan, it was sold again to the Berlinbased Victoria Insurance Company and its name changed again, this time to Viktorya Han.

Now the time for the Doğan Apartments' final name came. In 1942, the apartment was sold for the last time to Kazım Taşkent, the founder of Yapı Kredi Bank and he named them after his son, who died in a skiing accident in the Swiss Alps in 1939.

In this manner, the famous Doğan Apartments found its present identity. Since 1942 it has been a residential building and the tennis court that was next to the building has been converted into a parking lot.

Mostly artists, writers, celebrities and expats who live in Istanbul as well as embassies - that use apartments as guest residences - or the economically and culturally rich prefer to live in these apartments. It's not affordable on any budget, but especially architects, students and younger generations always dream to live here.

Truly, anybody who tucks their head into the courtyard or the apartments can see that the Doğan Apartments are beautiful beyond its panoramic view of the Golden Horn or its location in the new art center of Galata. There is neighborliness, a lovely volunteer gardener named Victoria Short who maintains the 400 square meter garden, very beautiful old fashioned windows and a peaceful silence that separates the building from the rest of the street with its bustling life. These apartments are spared from the cacophony of the city.

Architects, tourists and students, are allowed to enter the courtyard and observe it for five minutes quietly. For big events like filming, one has to get permission from the managers of each of the four blocks of the Doğan Apartments.

In 1997, Discovery Channel Multimedia and Stromfront Studios introduced a computer game called "The Byzantine Betrayal." The game starts in the Doğan Apartments, and while following clues you also have a short trip in the apartments' interior and courtyard.
Last Update: Aug 29, 2014 11:08 pm
RELATED TOPICS