Istanbul: the perfect venue to say 'I do 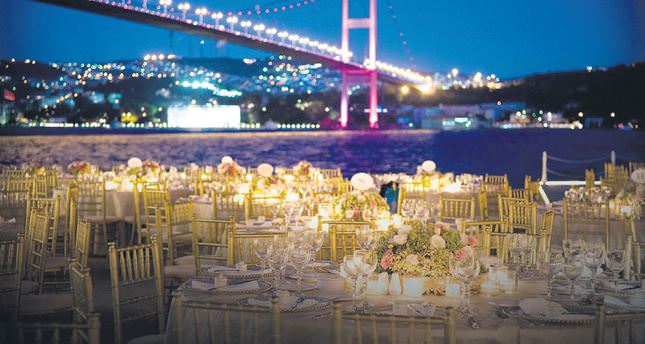 Turkey has a way of hypnotizing those who visit, and that's why more and more couples are choosing to the tie knot here. Its rich historical aura make it a memorable ceremony

"We couldn't think of anywhere better for a wedding than by the Bosphorus in Istanbul." Stephanie, from Scotland, and her northern Irish husband Henry had their wedding in the historic Sultan Ahmet Square in Istanbul, the sporting and social center of Constantinople centuries years ago. Having previously lived in Turkey's capital Ankara, before moving to their current home in Dubai, they chose Istanbul for their wedding celebration because they had fallen in love with Turkey.

There has recently been a boom in the number of foreign couples who choose to have their wedding in Turkey, Başaran Ulusoy, chairman of the Association of Turkish Travel Agencies (TURSAB) told Anadolu Agency. "Turkey's increasing international fame and the progress of its brand image have helped the country host more weddings for foreign couples," he says. "The interest in Turkish dramas in many different countries also contributed to the country's reputation," he adds.

This is especially true for Middle Eastern countries. This year, over 3,000 foreign couples decided to say "yes" to a life together in various cities across Turkey, mostly in Istanbul, says Ulusoy. Gülşat Şat, Deputy General Manager of wedding planning agency Cremano Wedding, tells AA that nowadays more and more couples are searching for an unforgettable wedding that tells a "fascinating tale." "Turkey, which has a wide cultural and historical heritage, offers really nice venues for weddings, many of them by the magnificent Bosporus." Turkish photographer Serkan, who works for photo company Photo-Latte, recalls an American couple who had been absolutely fascinated by the Bosporus River.

He remembers taking pictures of their wedding in a stylish hotel in Ortaköy, a quaint neighborhood in the Beşiktas district of Istanbul, near the river. Two American soldiers, the bride, Sonia, and the groom, Charles, had met during the U.S. war in Afghanistan. They decided to get married in Istanbul. There were no guests, no friends, no relatives invited - only the two newlyweds and their witnesses, who worked at the hotel. "Our wedding was perfect, from my bouquet of flowers to the arrangement on the table," says Sonia. "Getting married in another country was exciting and it was everything I hoped it would be." The wedding cost them less than $10,000 (TL 21,617), which Sonia says is cheaper than what it would have cost in the U.S.

The price/quality ratio constitutes an argument of choice to attract even the most luxurious matrimonial events. Of the aforementioned 3,000 foreign weddings, a little over 500 were extravagant ceremonies that contributed significantly to the country's tourism revenue, according to the chairman of the Association of Turkish Travel Agencies.The wedding of Stephanie and Henry, which was held on the terrace of the luxury Four Seasons hotel in Sultanahmet overlooking the Blue Mosque and Hagia Sophia, was one of these extravaganzas. "For the quality of the venue, the service, and the experience, we thought it was money well spent.

A wedding in either the U.K. or Istanbul doesn't come cheap; however, Istanbul brings far better value for your money." In May 2011, Lakshmi Mittal, business tycoon and one of the richest people in the world, hosted an Indian wedding for his niece. The wedding took place at Istanbul's lavish Çırağan Palace, "a venue of unparalleled beauty near the Bosporus; the only palace hotel in Turkey," stresses its sales director Güçlen Aksu. "For hundreds of years, the palace served the sultans; and this fact encourages couples to have their wedding at the palace," says Aksu, adding that over 500 couples held their wedding celebration at the Çırağan in the last five years.

Couples, mainly from Middle Eastern countries but also from Iran, Russia, Azerbaijan and Europe come to Istanbul for their weddings and they feel completely at home, Aksu claims. Şat, from Cremano Wedding, estimates that, on average, Indians and Arabs spend around $200,000 to $500,000 while that figure varies between $50,000 and $150,000 for Europeans whose weddings generally have fewer guests.

Weddings of foreign couples in Turkey, however, are not restricted to Istanbul. Many are also celebrated in the southern parts of the country including Antalya and Bodrum. Richard and Karly, from Hertfordshire, England, are planning to get married this year in the resort town of Kalkan on Turkey's southwestern coast, an alternative to the "expensive" celebrations in England. It will cost them less than $25,000. "We are extremely excited about our big day and are looking forward to introducing our family and friends to this beautiful place in Turkey."