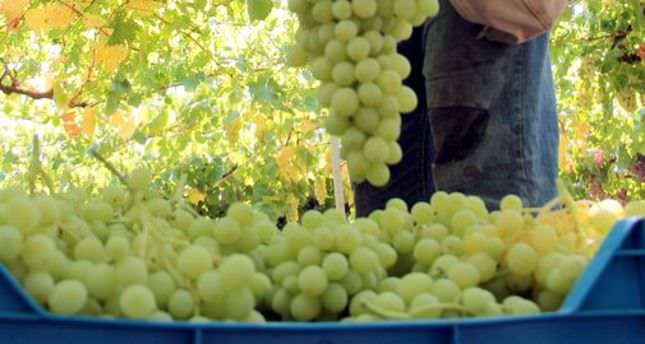 by Aug 29, 2014 12:00 am
Grape producer Ülgen brothers from Manisa's Sarıgöl district recently established Turkey's first grape drying facility which uses solar energy and biomass system. Ali İhsan Ülgen said that grapes are generally dried in September and October in Sarıgöl. "Due to autumn rains, grapes are left to dry outside until December, leading to a decrease in quality. We wanted to establish a special facility to dry Sultaniye grapes, which is currently in the testing phrase. Five-tons of grapes will be dried only in 50 hours with solar energy," he continued.

Project manager at Aktif Solar Energy Drying Systems (AGES), Ahmet Gözlükaya said that the system was developed to dry grapes, figs and tobacco in an affordable way across the Aegean region. "For the last 150 years, grape, fig and tobacco are dried outside at stalls. From now on, they will be dried with solar energy and biomass, which are healthier.

Gözlükaya gave detailed information about the new system's technical details. Grapes are dried under solar panels at 65 to 70 degrees. At night or in cloudy days, the biomass system dries them under the same temperature in 50 hours. Recently, figs were dried at 60 degrees in Aydın's Elbeyli district. Tobacco was also successfully dried in İzmir's Menemen district.

Gözlükaya further informed that grapes are washed before drying. "We wash grapes with a mixture of olive oil and oak tree ash. They are put into boxes and heated with solar energy. Oak tree ash is used for its potassium content, which does not leave any residue," he added. Ülgen further said that the first trial ended in success. "During our first trial, we had chance to see our faults. It takes longer to dry grapes in plastic boxes," he concluded.