Turkey's favored cherries fail to produce due to rains 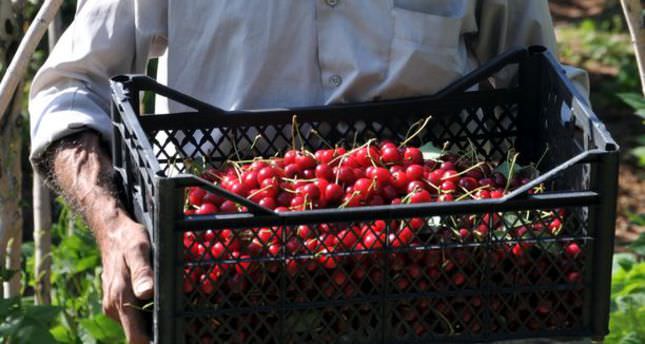 Turkey's cherries are often on the fruit platters of most European countries This year however, rains that took place before harvesting has meant that the cherry industr y was negatively affected, leaving both producers and exporters with a great loss

According to United Nations Food and Agriculture Organization's (FAO) data, cherry production, a product which Turkey produces more than any other country, did not please producers and exporters this year due to the rains that took place before harvesting. Speaking to an Anadolu Agency (AA) reporter, Uludağ Fresh Fruit and Vegetables Exporters Union Board Chairman Salih Çalı stated that this year's revenue from cherry exports is $145 million (TL 313.30 million). He noted cherries that grow in İzmir, Manisa, Isparta, Afyonkarahisar, Çanakkale are favored due to their long shelf life. Çalı said the previous year's revenue from cherry exports was $155 million. He stated that although they expect an increase in export revenue and the cherry harvest, there was a decline in productivity and exports due to hail and rains.

He informed that hail in the Kemalpaşa district of İzmir and rains in Uluborlu, Isparta damaged cherries and reduced productivity. Çalı said Uluborlu is an important center regarding cherry supply. He stated that although exporters purchased products in Uluborlu in the previous years, this year almost no purchase took place due to the damage done by the rains. "The same problem occurred in Afyonkarahisar and Çanakkale. Forty to fifty percent of cherries were reduced by wastage. Due to these reasons, the revenue from this year's cherry exports declined by $10 million," informed Çalı. He reminded that Turkey is in an assertive position as it is the global leader in cherry production.

Çalı said, "We expected $160-$170 million of revenue this year. The losses left both the producers and the exporters in a difficult position." He pointed out that Turkey exports its cherries mostly to European countries such as Germany and the Netherlands along with Russia. He said they continue to work on exporting cherries to the Far East. Çalı stated that damage caused by rain is not covered by insurance and added they want this problem solved as soon as possible.
Last Update: Aug 29, 2014 1:58 am
RELATED TOPICS