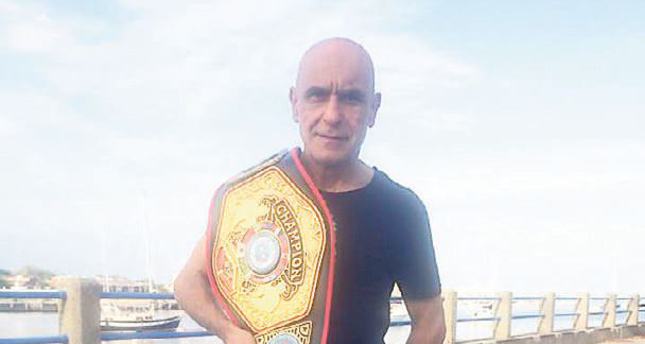 by Zeynel Yaman Sep 04, 2014 12:00 am
Fifty-eight years old Emin Tokay be- came champion in boxing tournament held in U.S. The national boxer competed in the "over
35 years of age" category of the tournament which hosted 1,600 sportsmen from 20 countries. For- mer champion Tokay who knocked over his op- ponents for the second time said, "I am proud of myself for winning the Golden Glove once again."

Starting boxing in 1973, at a very early age, Tokay competed in amateur's league. Tokay was influenced by European champion Turkish boxer Cemal Kamacı but he retired from boxing in 1984. After leaving for U.S to be an electric tech- nician, the boxer was badly injured in a traffic accident. As he continued his life with physical therapy, he decided to turn back to boxing for training. Tokay, whose hair was white since his youth, dyed his hair and started training in dis- guise. He became champion in a tournament held In U.S. in 1992. Tokay saw an announcement at a store which sells sports equipments, saying a boxing tournament will be held for Golden Glove and it is open for international participants.

As the former champion of the tournament which he won 22 years ago when he was 36 years old, Tokay wanted to achieve a worldwide success once more. The sportsman borrowed money from his relatives and flied to U.S. for the tourna- ment. He worked with first a Turkish cage fighter and then a 23 year old black boxer for training. Wearing the handmade jersey which he made himself, Tokay competed against professional op- ponents aged 43, 47, and 55. "I went to U.S for the championship title. It was a proud moment keeping Turkish flag flying among 1,600 boxers and thousands of audiences. Champion Tokay continues to train his students, including well- known figures in Turkey at Mecidiyeköy Gym.