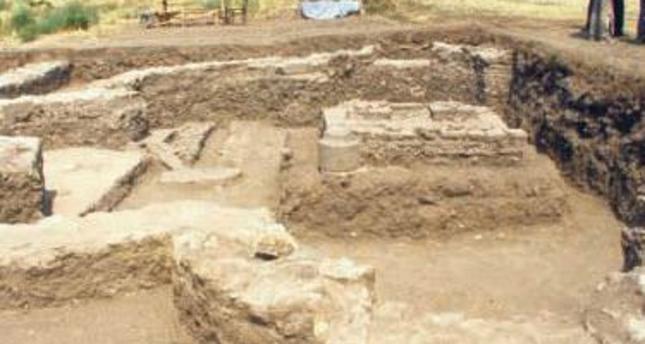 by AA Sep 04, 2014 12:00 am
Turkish archeologists unearthed a Romanera church dating back to the fourth century A.D. in Gracanica, located near Pristina, Kosovo. In 2012, under the supervision of Associate Professor Haluk Çetinkaya of Mimar Sinan University's Department of Archeology, the team commenced the excavations in Ulpiana, one of the region's largest and most important Romanera settlements, following an agreement with Kosovo's Culture Ministry.

A baptistery was discovered before the archeologists discovered a section of the church with the belongings of two families from different historical periods. Çetinkaya stated that the church underwent a restoration when it was destroyed toward the end of 4th century.One-third of the ancient building was unearthed, which is presumably 19 meters high.

Excavations continue to discover the central section of the church covered with soil. The experts consider many factors while defining the construction date. "We examine construction materials and coins. Later, we date the skeletons," he continued.The skeletons buried next to the baptistery were examined at laboratories. "They date back to the fifth century.We also found 101 coins, most of which, the readable ones, go back to the fourth century," he said. Dating is an important phrase in archeological examinations.
Discovered materials, such as brick, give important clues. "Bear in mind, it was forbidden to use mortar during church construction after the first quarter of fifth century.

However, we revealed the remains of mortar, suggesting the church was constructed before the fifth century," Çetinkaya informed.Milot Berisha of the Kosovo Archeology Institute said the pre-excavation work began back in 2008 with German archeologists.They conducted research on an area of 50 acres with modern geophysical technologies.The institute began working with Turkish experts in 2012, and restoration works continue concurrently with excavations.