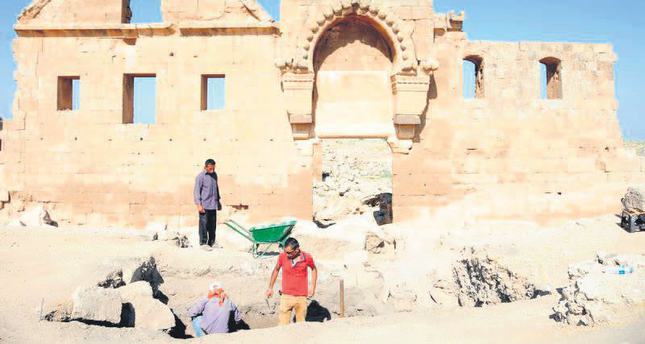 Excavations in the Harran province of Şanlıurfa revealed public baths dating back 1,400 years. Remains of the baths and other ancient buildings are expected to shed light on the history of the area

The ancient remains of a 1,400-yearold public bath were discovered during excavations at the Harran dig site.Excavations are continuing at the ancient site, which has been an uninterrupted settlement since 6000 B.C. Known as the capital city of Assur and the Umayyad Caliphate, Harran's ruins are exemplary with schools, temples, mosques, city walls and madrasahs. Within the scope of the archeological excavations that aim to erect historical artifacts, three floors, 150 rooms and the citadel of the castle were cleaned.

During excavations of the ruins, which also include Roman column barrels and capitals, remains of one of Harran's 14 public baths were unearthed. Head of excavations of the Harran ruins, Professor Mehmet Önal, in his statement to Anadolu Agency (AA), said they are planning to unveil many remains that will offer insights into the area's history.

He said they came across a well near the huge tablet that was discovered last year and added that the ruins suggest a public bath due to the plastered walls and well. He said, "This place was probably built for the mosque. Ablution facilities will be unearthed later on. The public bath is estimated to be 1,400 years old." He said that they are carrying out another excavation near the remains of the baths and that they discovered a small room and a cellar attached to it. "We think that these ruins belonged to the ancient University of Harran at that time,"Önal concluded.
Last Update: Sep 05, 2014 1:53 am
RELATED TOPICS