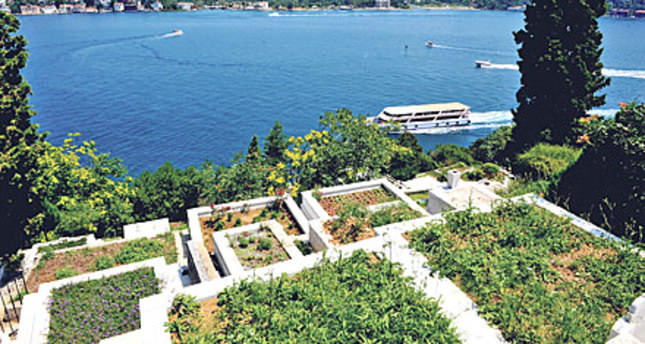 by AA Sep 06, 2014 12:00 am
President Recep Tayyip Erdogan, speaking recently in Istanbul for the last time as Turkey's prime minister, vowed that his love for the country's biggest city - where he served as mayor - was such that he wanted to be buried there. For Erdogan, this wish is easily satisfied as he remains the most senior figure in Turkish politics. However, for many Istanbulites who want to have their loved ones' tombs close to more accessible parts of the city, a fever-pitch demand for space is pushing grave prices higher and higher. If, as the common saying has it, "Istanbul is paved with gold," buying a two-meter square grave in Istanbul's top-class cemeteries can cost TL 18,000 ($8,296) -per-meter price which mirrors that of renting a luxurious apartment with a Bosporus view. The cheapest grave plots, perhaps unsurprisingly, are often found in the more remote parts of this vast city. They can cost around TL 2,000, although, in a country where the minimum monthly wage is TL 846, this price tag is still high for many families. Understandably, the high price for plots in cemeteries arises from the strong demand and low availability of space in a rapidly growing city of 15 million people. According to the Istanbul Municipality, which is the city's only governing body for graveyards, there are more than 330 cemeteries covering 8 million square meters - the equivalent of 740 football pitches.

Around 75 percent of these, one fifth reserved for religious minorities, are already full. Municipality sources could not verify the exact capacity of these graves because the body of another family member can be buried in the same plot "five years after the last burial." Head of the Cemeteries Directorate Adem Avci told AA that an area of more than 420,000 square meters will be allocated for new cemeteries in Istanbul, a city where 170 people are buried every day and more than 60,000 people die every year.

The directorate is the only body responsible for cemeteries; only last year, private entrepreneurs were allowed to open and run cemeteries due to the capacity problem. However, the issue of high costs does not seem to have been resolved since 2014 prices remain the same as last year. The municipality continues to offer free burial services.

Some grave owners, however, are posting online ads to sell their plots for up to TL 600,000. Many of these are near high-class venues; prices go up based on the graves' view or closeness to famous deceased people.

However, the city council has said these transactions are illegal. One real estate agent, who posted the online ad on behalf of four siblings selling their father's plot, said they were not aware of the municipality's law regarding cemetery property. Due to Islamic customs, cremation or unorthodox burials are generally rejected by Turkish people, meaning the issue of grave capacity is unlikely to go away. As one of the tallest cities in the world, Istanbul's skyscrapers extend the city's reach vertically; perhaps a modern necropolis stretching downwards may be a radical solution for families wishing to bury their deceased relatives.