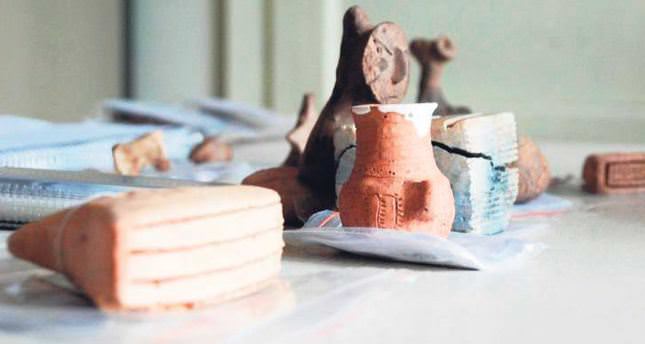 by AA Sep 08, 2014 12:00 am
A 5,000-year-old brush and toy rattle were discovered during the excavations conducted in Kütahya's Seyitömer Tumulus under the supervision of Dumlupınar University (DPÜ).

The privately-owned area has been under excavation since 1989 to unearth a 12-million-ton coal reserve. DPÜ Department of Archeology chair, Professor Nejat Bilgen, has led the excavations for almost 10 years, and many artifacts have been discovered and submitted to Kütahya Museum.
The archeological findings date back to Roman, Hellenistic, Achaemenid and Middle and Early Bronze Ages. This year, archeologists revealed a toy rattle, a brush and a number of goddess figurines. Speaking to an Anadolu Agency (AA) reporter, Bilgen said it has been nine years since they started surveying the field.

The findings discovered on layers "A" and "B," which are the highest points called "palace" date back 5,000 years. "We are currently excavating layer 'C,' which goes back to the Early Bronze Age.

The team discovered buildings made of adobe bricks, reflecting the archeological style of the Anatolian region during those times," Bilgen said.
Additionally, a number of clay ceramic bowls were found since the area is highly rich in clay. The bowls show the artistic talent of master craftsmen who lived 5,000 years before. "A thousand pieces of ceramic bowls were brought to the museum after a comprehensive restoration. Meanwhile, we create the drawings and take photos of artifacts to properly continue the restoration process," he continued. The archeologists also found a number of clay loom weights. Layer "C" features different clay figures along with marble figures of a mother goddess and small clay bull figurines.
The findings suggest that the ancient settlement used to recognize the worship of a sacred bull.

Interestingly enough, the shapes of ancient cookers are reminiscent of bullhorns. Bilgen underscored that the tumulus housed many ancient civilizations that left the region with a rich archeological history. The brush that was discovered is made of clay and animal hair. "The brush is decorated with different figures, and is in the shape of triangle.

It was presumably used to paint and polish ceramics during the Early Bronze Age," Bilgen stated.Similarly, the small toy rattle is made of clay and beautifully embroidered with figures. "The rattle dates back to 3,000 B.C.We are lucky that it still remains in one piece," Bilgen concluded.