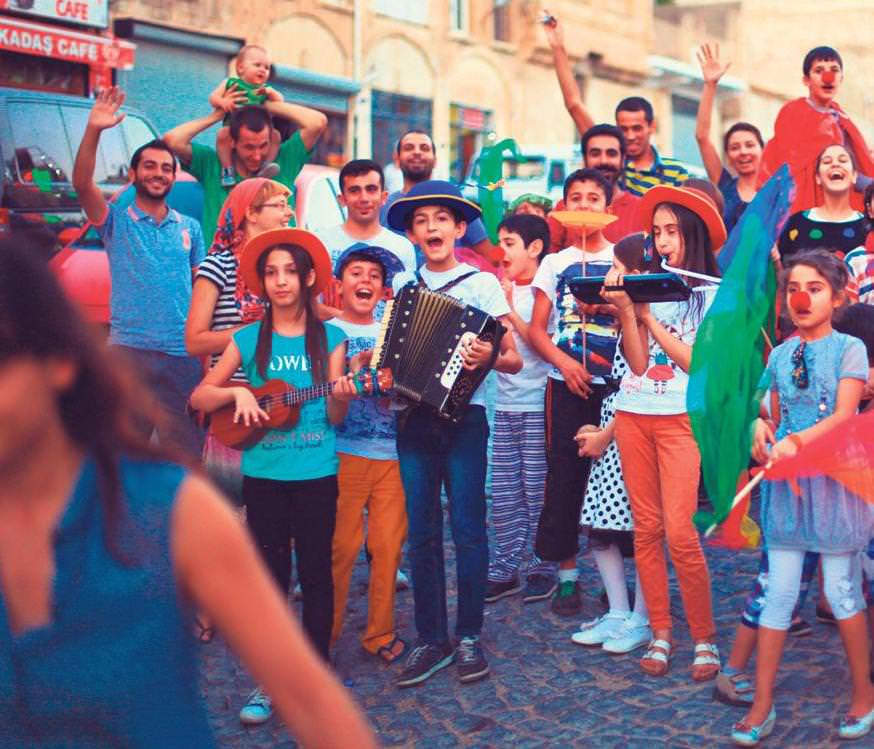 by Leyla Yvonne Ergil Sep 10, 2014 12:00 am
Social Circus is described as "a growing movement toward the use of circus arts as a medium for social justice and social good."
It uses alternative pedagogical tools to work with youth who are marginalized or at social or personal risk. Sirkhane, the Social Circus School run by the Art Anywhere Association, is devoted to offering workshops on circus arts, painting and music to the war-affected children in Mardin. The fourth IM International Social Circus Festival, which will be held from Sept. 10-20, will bear the fruits of their labor as local, Syrian, Afghan and Yazidi refugee children will perform the skills they have acquired along with their trainers. Since 2011, Art Anywhere has organized a number of events, projects and workshops in and around Mardin, with the aim of benefitting the local community and especially its youth and children and providing them with the chance to gain skills while also socializing. Art Anywhere's events are held outside, are open to everyone and include parades, live music and circus acts in which loc a l crowds gather, creating a sense of community.

Sirkhane is a social circus school run by Art Anywhere Association Volunteers that offers a creative space for Syrian, Yazidi and Afghan refugees as well as for the local Mardin youth to learn and practice circus skills, fine arts, music and theatre while also gaining important social skills such as teamwork, trust and self-confidence. Classes began at Sirkhane on July 1, led by a dynamic team of volunteers and trainers from Turkey, the U.S., Syria and Poland.

Approximately 60 8-18-year-olds participated in workshops held five days a week from Wednesday until Sunday on juggling and a variety of circus arts as well as on painting and music. The festival commenced at the start of the month with intensive workshops in both Sirkhane as well as in the Yazidi refugee camp. The workshops will continue as the festival transitions into a circus caravan that will host performances in various spots throughout Mardin. Art Anywhere's Pınar Demiral explains that the number of trainers have increased due to the festival and, therefore, they are now able to offer workshops and hold performances in the Yazidi camp hosting refugees from Iraq. Pınar summarizes their process by explaining that in order to ensure quality and consistency they have developed a method of selecting a core group of 16 people who they are now teaching to be trainers themselves. "This ensures that when we leave the camp, these trainers can teach the other children to train others and to begin staging performances amongst themselves. Even though they may appear to have nothing, they actually have something that is more valuable than anything: time. We want to create the awareness of how they can use that time in a productive manner," she explains. As an NGO, the Art Anywhere Association collaborates with other NGO's such as the Mardin Cinema Association and the Mesopotamia Culture Association as well as public schools, local municipalities, museums and youth centers. For this year's festival, they are also hosting artists from the Afghan Mobile Mini Circus for Children, the Palestinian Circus School, the Armenian Circus and from the Art-Platz Residence in Ukraine. This year, Sirkhane was Turkey's first addition to the World Social Circus Map, an online map indexing organizations offering social circus workshops, a project spearheaded by Cirque du Soleil's social circus program, Cirque du Monde.

Now, their intention is to purchase a big circus tent in order to make Sirkhane both permanent as well as portable by setting up a tent for longer periods in areas where help is needed most. Although their Indiegogo crowd-funding project recently came to a close, it is still possible to donate via PayPal through a link on their website: www.heryerdesanat. org, which also has a blog and a full schedule of the festival's events held in and around Mardin.