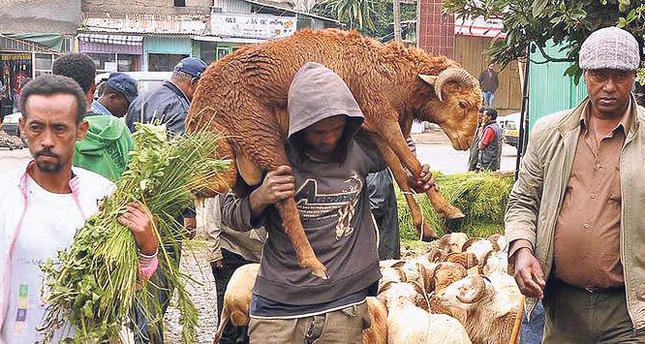 by AA Sep 12, 2014 12:00 am
Ethiopia marked the arrival of 2007 on Thursday according to a unique calendar that reflects a blend of religious and seasonal/natural phenomena. "The Ethiopian calendar is ancient [and] takes its logic from lunar, solar and astrological considerations,"

The Ethiopian calendar has 13 months, including twelve of 30 days each.

The 13th month consists of five days - although every fourth year it lasts for six days.

The Ethiopian New Year falls as the sun begins to make itself felt after three months of rain in most parts of the country.

The streets were packed with people shopping for live lambs, roosters, butter and eggs, among other things.

Lambs and roosters are traditionally slaughtered at home.

Some families pool their money to purchase bulls, sharing the meat between them.

Alazar Samuel, a renowned Ethiopian artist, sees the Ethiopian New Year as both real life and drama. "The real life is that it is one day added to the river of life, and [it's] drama due to all the rituals-slaughters, get-togethers, bonfires and all," he told AA.

Emebet Tesfaye, a statistician, plans to welcome the New Year with joy and a sense of rejuvenation. "Our New Year is very expensive, though," she told AA, noting that it coincided with the start of the new school year. "Costs have gone up by the day," she added.