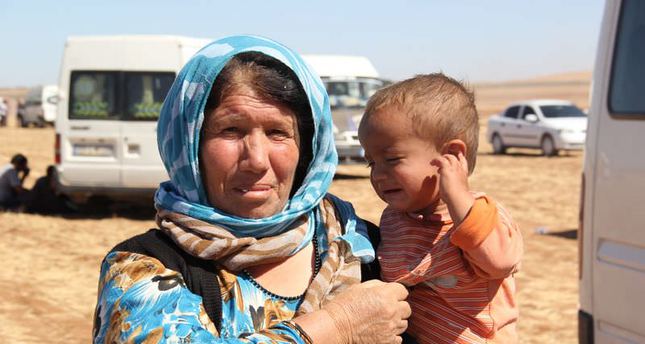 Thousands of Syrians who managed to flee from the battles in their land crossed the Turkish border on Friday. Undoubtedly, Syrian mothers endured very difficult conditions on the road as they fought against thirst, hunger and the fear of losing their children

Sixty thousand women who fled from the fight between ISIS (the Islamic State of Iraq and al-sham) and the PYD (Democratic Union Party) in Ar-Raqqah arrived in Turkey after a very long journey to settle in schools or the homes of their relatives in the Suruç district of Sanlıurfa. The women fear for their children the most. Women who lost their husbands, children and relatives hide their pain behind a smile for their children and hold on to their lives. Mothers endure the misery of life through the love of their children and prey for a safe return to their homelands after the war is finished. Carrying children on their backs without water and food during the long journey, Syrian mothers' only concern is their children.

One of the mothers, Fatma Hatun, in her statement to Anadolu Agency (AA), said she decided to flee from Syria with her four children due to the heat of the clashes. She said that her husband stayed, though, adding, "Two of my children were able to walk; I carried the other two on my back." She said she did not mind their weight during the journey, but whenever they cried out of hunger or thirst, her heart broke. "I thought we were going to die before reaching Turkey, but God kept us alive," Hatun said. Rojda Esvan, who carried her disabled seven-year-old daughter across the border, said she is not afraid of dying, but of leaving her disabled daughter alone in the world. "My daughter had a hard time walking, but we brought her here with the help of other refugees," said Esvan.

She said she was sorry to leave her home, but grateful to Turkish officials for letting them cross the border. Fatma Hac Ali stated that they have been through hell for the last couple of days, and said her children cried all the time, fearing the sounds coming from the battlefield.