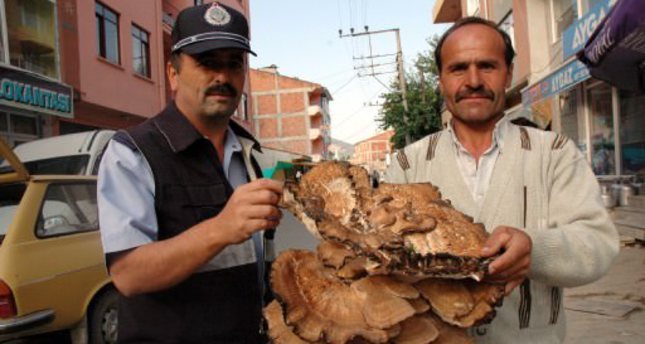 by AA Oct 09, 2014 12:00 am
Various species of mushrooms have been growing in the forests of Kastamonu province of Turkey, following a spell of weather that has been conducive to their cultivation. Assistant professor Sabri Ünal, manager of Kastamonu University Mushroom Research and Application Center (KÜMMER), said a poisonous mushroom species might be mistaken with "saffron milk cap" mushrooms, which is highly popular in the region, and warned locals to be extra careful while gathering mushrooms in the forest.

Mushrooms are rich in protein, vitamins and minerals, and are good for your health as long as it is consumed in moderation. However, unfortunate incidents occur when people cannot distinguish edible mushrooms from poisonous ones. "Local people should gather mushrooms from familiar places, but they should be careful as these places are habitats of wildlife," Ünal said, adding people should not go there with guns. He advised people to buy cultivated mushrooms, as they are of high quality. Moreover, people can consume cultivated mushrooms without having doubts over their safety because it is grown under supervision.

Ünal said that there are also false beliefs among people about mushrooms. "For instance, people think that wormy mushrooms are not poisonous," he said, adding these kinds of beliefs are not based on scientific studies. He further said a mushroom species named amanita phalloides (death cap), which is indigenous to America, has been seen in the Kastamonu forests. Even just one piece of amanita phalloides is poisonous enough to kill an adult human. "Choosing between poisonous and edible mushrooms is similar to Russian roulette. Do not let a mushroom to be your last meal, no mushroom is sweeter than your life," Ünal said, adding that people with symptoms of mushroom poisoning such as nausea, vomiting and visual impairment should be admitted to the nearest hospital as soon as possible.

Kastamonu University Mushroom Research and Application Center is planning to be involved in an EU project to educate and certify local people on the proper way to gather mushrooms. In addition to this, the center is considering collecting mushrooms that are gathered by locals and putting them on the market after being categorized according to their sizes and standards. Ünal emphasized that they aim to prevent mushroom poisoning by selling mushrooms in certified establishments. "We believe that Turkey will benefit from this kind of initiative," Ünal said.

He also said that they will add new information about mushroom species to the website of KÜMMER and expressed his hope that people will benefit from this information once it is public.