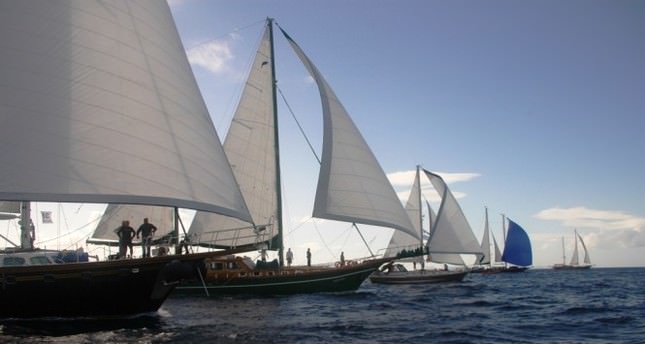 by Leyla Yvonne Ergil Oct 18, 2014 12:00 am
The 26th International Bodrum Cup Regatta sets sail from Bodrum Peninsula to the neighboring Greek islands and back this week for the largest sailing festivity in the Mediterranean in over a quarter century. The Bodrum Cup, which has been organized by the Era Bodrum Sailing Club since 1989, is a wonderful way to close out the summer season in a festival-like atmosphere with a series of entertaining events. Held annually in the third week of October, this year the 26th International Bodrum Cup Regatta begins on Monday Oct. 20 and runs until Saturday Oct 25. Not only can sea and boat-lovers take part in the wide variety of events organized for the festival, but also it is possible to join the race aboard one of the many participating vessels.

During this six-day sailing and socializing event, more than 100 wooden yachts and over 1,500 participants are expected to take place in the regatta, which will kick off from Bodrum Peninsula on Monday after which they will make their way to a series of Greek islands before returning to Yalıkavak and then Bodrum.

Turkey's most exquisite wooden boats, gulets, which are famed for Blue Voyage tours, as well as tirhandil and other style sailboats, will be joined by IRC mega yachts and catamarans as a first in the competition's 26th year in categories for the two-continent race.

The regatta, consisting of five stages covering a total distance of 75 nautical miles, will begin and end in Bodrum. The route will include Kalimnos, Leros, and Yalıkavak, and will terminate with the Yalıkavak to Bodrum leg. For this year's events for the regatta, a very unique floating city, aptly named Bodrum Cup City, will be set up on a floating platform that will be surrounded by 150 yachts anchored side by side in Gümbet. The 500-square-meter floating city will have a concert area, café and stands selling local handicrafts that Bodrum was once known for, such as sandals, sponges and jewelry. With the surrounding yachts creating a surface area of over 1,200-square-meters, an audience of 2,000 will be able to take part in the floating city events aboard accompanying boats. The Bodrum Cup kicks off on Monday Oct. 20 in Bodrum with the regatta's traditional march to Bodrum Castle for the opening ceremony aboard Turkey's one and only school training ship, the STS Bodrum. At 7:30 p.m. there will be an evening cocktail party held at the prestigious Cuba Bar. On Tuesday Oct. 21, the regatta's Bodrum leg begins and at 7:00 p.m., there will be a Blue Voyage Cuisine Competition in which amateur and professional cooks will present dishes prepared onboard their respective boats to a jury that will select the winner of the Golden Ladle for the Best Starter, Best Meze, Best Main Course and Best Dessert. In the evening, İlhan Şeşen, founder of the popular Anatolian rock band Grup Gündoğarken, will perform a concert on the sea at Bodrum Cup City. On Wednesday Oct. 22, the regatta sets sail for Greece, landing in Leros and on Thursday Oct. 23 in Kalimnos. On Friday Oct. 24, the regatta returns to Turkey to dock at the magnificent Yalıkavak Palmarina for a series of exciting events including a cocktail party, concert and costume contest, which has also become a classic of the Bodrum Cup Regatta. On Saturday Oct.25, the Bodrum Cup comes to a close with the Regatta Awards Ceremony at 8:30 p.m. followed by the Bodrum Cup Party at 10:00 p.m. aboard the floating city. There will also be an Instagram Photo Contest in which the best race shots, selfies and funniest photos taken during the race and published with the hashtag #instabodrumcup will be selected by the jury.

The Bodrum Cup distinguishes itself by allowing passengers the opportunity to experience the excitement and pleasure of the regatta first-hand onboard both competing and non-racing yachts. To be a part of the action, participants will be allowed to take part in the Bodrum leg on Oct. 21 for TL 50 ($22). Or, should you want to join the entire tour, for 500 euros (TL 1,450/$640) you can stay in a cabin on board a racing vessel.

Among this year's fleet will be the Büyük Yunus, which is vying for a Guinness Book of World Records title for being the sole wooden yacht to compete consecutively for 25 years. Guinness officials will also be coming out to this year's races to verify the record. One of the most attention-grabbing vessels that will be at this year's Bodrum Cup is the Rhea, a 113-year-old wooden boat that British electrical engineer David Ross has sailed in the regatta consecutively for the past 15 years.

The most significant vessel that will be a part of the regatta, however, is the Wellabled, a boat designed to facilitate unhindered movement for the disabled as a social responsibility project to enable the disabled to enjoy the sea and sailing.

The annual Bodrum Cup yacht regatta is a special celebration of the end of the sailing season that brings together sailors, yacht owners or potential owners, sea and environment lovers as well as tourists, expats and locals. Come check out this oldest and biggest sailing event in the Mediterranean in our own backyard of Bodrum for a fun time and to meet great people amid some of the most beautiful boats in the world to end the summer right.