Orphans from around the world meet in Istanbul 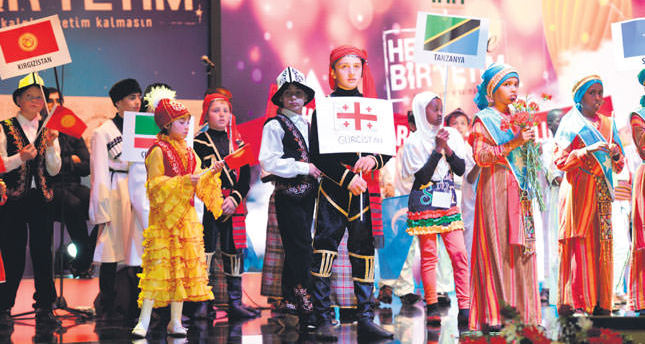 The Humanitarian Relief Foundation (İHH) brought orphans, which is supported with the ‘Sponsor Family’ program, together with other children from around the world at the Sixth International Children’s Gathering

The concluding meeting of the event took place at Sinan Erdem Sports Hall and many guests attended the event including Deputy Prime Minister, Yalçın Akdoğan, Minister of Family and Social Policy, Ayşenur İslam, Minister of National Education, Nabi Avcı, President of İHH, Bülent Yıldırım and Mayor of Esenler Municipality, Mehmet Tevfik Göksu. The event, which began with a recitation from the Quran, was followed by a short film about the orphans that was produced by İHH. Children from all over the world read poems, sang songs and performed their traditional dances in their local attires.

Speaking at the ceremony, Yalçın Akdoğan underscored that orphans should be always be taken care of. "According to our faith, being an orphan does not mean having to be alone, it means being the child of the religious community and the nation." He emphasized that looking after orphans is a duty in Islam, as it is a custom that their family members adopt them. He continued, "Sometimes, they ask me why I am so interested in this organization and help them so much […] we do not turn our backs on people who are in need of help." He said that it is their duty to open their arms to whoever is in need or those who have been victimized, and emphasized how Turkey has welcomed more than 1.5 million Syrians refugees, up from 260,000 last year.

Akdoğan said giving aid is the moral stance, and they have to continue doing it even though some nations see it as a social activity. "We will continue to fight to glorify justice," he said, adding that some people are annoyed by Turkish foundations helping the Middle East. He said there are people who do not want Turkey to be active in the Middle East. "We do not wonder if there is gold or petroleum when we go somewhere to bear a helping hand," Akdoğan added.

Ayşenur İslam spoke at the event and said that the orphans are under the protection of Muslims. "Taking care of orphans is among the most important and basic problems of humanity," she said, adding that wars and natural disasters affect children most and it is estimated that there are 400 to 500 million children that have been orphaned due to natural disasters, wars and similar incidents even though official statements claim there are 200 million. Children without caretakers are the easiest prey for beggars, prostitution and thievery gangs, İslam said, and "It is known that five million children have been affected by the war in Syria. What brings us together is the desire to open our arms and hearts for these victimized children," İslam remarked. Within the scope of the International Children's gathering, the orphans spent 10 days in Turkey, and toured Bursa and Istanbul in order to get to know Turkish culture and its people better. Orphans from Turkey, Mauritania, Bosnia and Herzegovina, Somalia, Albania, Macedonia, Yemen, Syria, the Palestinian Territories, Georgia, Kyrgyzstan, Pakistan and Sri Lanka attended the event.