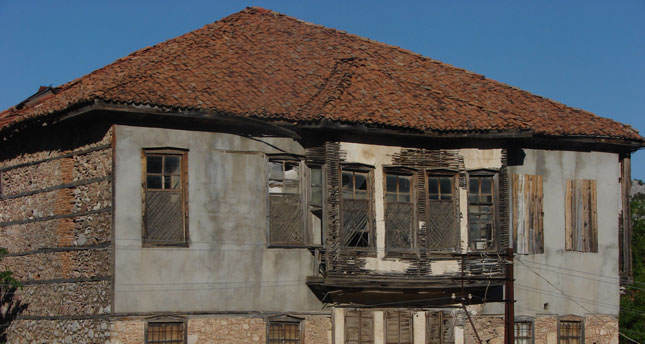 Located in the Ormana neighborhood of Antalya, button houses (düğmeli evler) – houses built without using mortar or nails – have challenged time for centuries. The Ministry of Culture and Tourism plans to preserve Ormana and transform the neighborhood, which has the characteristics of an open-air museum, into the Mediterranean version of Safranbolu in Karabük.

In 2005, the ministry declared the neighborhood a protected urban site and an alternative tourism center. After the necessary studies were completed, 150 Ormana houses were detected and 49 of them were given special protection status by the ministry. Button houses carry the traces of Ottoman architecture, as they are over 100 years old, and it is assumed that the local architecture was inherited from the Karamanids.

The houses were built with limestone that is easy to find in the region along with tar and juniper timber. The interior walls of the double-storey houses were plastered with white soil. Local entrepreneur Aydın Özgüven, president of the Ormana Cultural and Local Culture Tourism Inc. and Abdullah Nevzat Özgüven Foundation, said they are restoring the button houses for the first time since they were built and will introduce the houses to tourism after restoration, which will be conducted under the supervision of the Antalya Protection Agency.

He said two of these houses are currently being restored and they will serve as boutique hotels once they are finished. "We want to improve tourism in Ormana," Özgüven said, adding that they want Ormana to be the Safranbolu of the Mediterranean region. He also emphasized that most of the houses were built more than 150 years ago.

The frames of the houses were built using wood from cedar trees and stones without using mortar. Moreover, cedar dominates the interior designs of the button houses. Özgüven claimed that they are also using cedar wood during the restoration. "The cedar wood that was used in the construction of the buildings 200 years ago is still strong, there has been no deterioration," he said. As a part of the restoration works, a bathroom will also be added to each room.

Özgüven highlighted that there are 49 button houses that are currently registered in Ormana, which are under the protection of the ministry, among many other traditional buildings. The buildings that have been declared as a protected zone cannot be restored without permission from the ministry; although interior adjustments are allowed in other traditional buildings, the same practice must first receive permission when it comes to registered buildings. Özgüven said that they use local building contractors and local products during the restoration of the historical houses in Ormana whenever possible and they "try to restore the remaining button houses to as close to their original state as possible," he said.

So far, one of the button houses has been renovated and introduced to tourism as a restaurant and hotel. "Right now, people are visiting the neighborhood for a day; however, we have hosted 5,000 tourists since April," Özgüven said. Tourists coming to the region for cultural tourism are hosted in the Ormana neighborhood, and officials are planning to increase their bed capacity to 100 in order to bring foreign tourists to the region for 15 days or more. "Hopefully, we will achieve our goal in the coming year," Özgüven emphasized.

Muhsin Bayındır, one of the contractors that restore the houses, said he inherited this profession from his father and they are trying to protect their history. "Instead of iron, the frames of the houses were built by connecting wooden pieces (peştivan) and beams (hatıl) together. These bonds help the buildings maintain their strength. As the walls of the houses have bulges, they are called 'button houses,'" Bayındır said.

He also drew attention to the usage of cedar wood in the construction of these houses. "The wood lasts for centuries as it drys very quickly," Bayındır said, and added that the houses were planned for a family of four. Each room meets the needs of the family, and there is a sofa located outside the rooms. It was also designed to be used during wedding ceremonies and other big celebrations. As wood composes 70 percent of the houses, everything that is used in the restoration work is produced by hand, which takes more time than usual. "It takes us two years to renovate a two-story house," Bayındır said, but claimed that there are no other construction experts who can restore the button houses, as "there is a lack of experienced constructors."