Canada's birds get tipsy on fermented berries, then sober up in drunk tanks 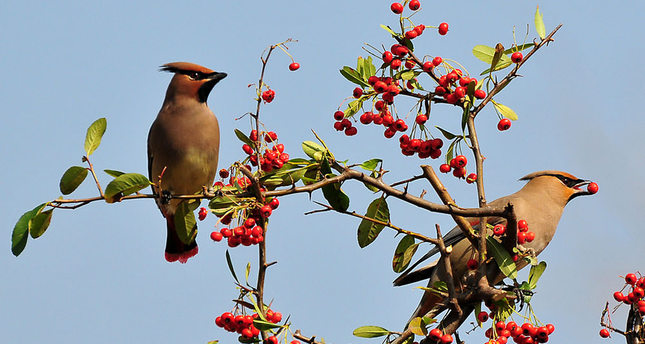 by AA
Nov 19, 2014 12:00 am
It may sound comical, but it's no laughing matter – birds in Canada's far north are getting tipsy on fermented berries and forced Environment Yukon to set up an avian drunk tank.

The birds, predominately Bohemian waxwings, are flying into windows and walls after eating mountain ash berries which have fermented due to frost. The berries are found on rowan trees, a popular species that people plant on lawns and in backyards.

"What happens around this time of year is that after the frost, the berries will ferment and so the birds actually get a little intoxicated from eating these berries and they do in fact get drunk," Meghan Larivee of the animal health unit at Environment Yukon told the Canadian Broadcasting Corporation. "So they are flying around but they're not as good at avoiding obstacles. Hitting windows is not uncommon."

The birds are fattening up on the berries so that they can survive the cold weather ahead.

Larivee said people who find little birds drunk or unconscious can call or take them to Environment Yukon where they will be put into a hamster cage "so they can sober up until they are able to be released."

An Environment Yukon team recently found three drunk Bohemian waxwings but two died due to extensive injuries after flying into hard surfaces. The third sobered up after a few hours and survived.

A pine grosbeak also showed signs of intoxication and was not doing well at Environment Yukon, Larivee said, so the bird was transferred to the Yukon Wildlife Preserve where it is improving.

A 2012 study found that waxwing birds have bigger livers that allow them to eat fermented berries, CTV News reported. But the birds overindulge and in doing so overwhelm their livers.

The Yukon, with a population of about 34,000, is 483,450 square kilometers in size – larger than the state of California – and lies between Alaska and the Northwest Territories.