Sing away the winter blues in a choir in Turkey 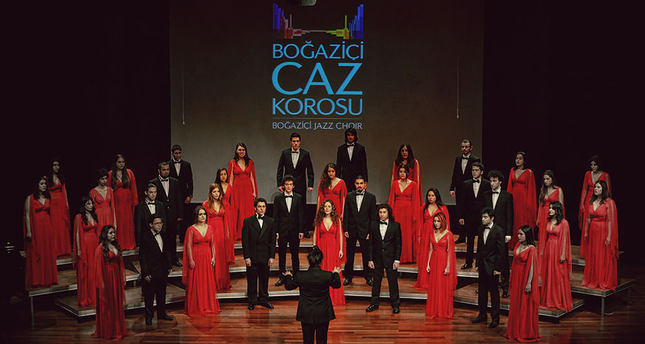 Istanbul has an active choir scene that includes many expat participants who practice and perform in unique venues around the city. You can witness some of these excellent choirs perform or join in for the perfect fall season activity that is both fun and a great way to network

"I don't sing because I'm happy, I'm happy because I sing," William James was once quoted as Cervantes has said, "He who sings scares away his woes. Those who sing know that it can be a wonderful form of therapy and a very special experience to share with others. Joining one of Istanbul's many expert amateur choirs could be a wonderful way to meet people while expressing yourself artistically and warming your soul on cold winter nights. Don't fret should you not be musically inclined, checking out practices and performances of Istanbul's choir scene is also an enjoyable way to be a part of the city's polyphonic season.

The following are a list of some of Turkey's most active and international choirs to get you singing in the rain, as it were, this fall and winter season.

The Istanbul European Choir, which was founded by the city's German community in the 1960's, is by far Turkey's largest amateur independent choir with nearly 100 members from all nationalities, religions and professions. To join you must have basic singing skills, know how to read a few notes of music and harbor a love for polyphonic music. A very social community, the IEC also holds performances in churches and other unique venues every few months. Practice is on Tuesday evenings, plus one Saturday afternoon a month at the Deutsche Schule (German School) located in Tünel, Beyoğlu. Check out a rehearsal to see if it's a fit and then try out to join.

The Boğaziçi Jazz Choir, by far Turkey's most prestigious a cappella choir, led by conductor Masis Aram Gözbek, has seen unprecedented success receiving countless awards in competitions abroad as well as with a video that went viral of a performance by the group on the Istanbul metro. A true class act, in October, they were one of 11 choirs extended a special invitation to attend the most prestigious choir festival in the world held in France, Polyfollia, and were Turkey's first and sole representative. They have approximately 60 members at present and a repertoire of contemporary music, jazz and folk music in a wide variety of languages including, but not limited to, Turkish, English, Latin, French, Chinese and German. Practices are held twice a week at the Yücel Kültür Vakfı in Sultanahmet. This choir is open to everyone who successfully makes it through auditions. There is also a youth choir for chorists born between the years 1996 and 1999.

Choral Istanbul, comprised of a few dozen choristers from various nationalities and religions that live in Istanbul, both practices and performs regularly, providing a great opportunity to take part in concerts held in many of Istanbul's majestic venues. Their polyphonic repertoire of popular, spiritual and folk songs are in a variety of languages, spanning from Turkish, English, Italian, Japanese, Macedonian, Greek, Armenian, Hebrew, Spanish, Swiss, and even Zulu. They practice once a week at the Üç Horan Armenian Church off of İstiklal Avenue and anyone with an ear for music who can sing in tune is welcome to join.

The Khalkedon Polyphonic Chorus, which is based in Kadıköy and has been ongoing for eight years, is open to anyone with musical talent and is seeking new members. You can join this choir, which performs in a variety of languages.

A cappella Grup 34 is also open to anyone interested in choir music. This a cappella group performs in a variety of languages, however, this year their repertoire is based around the 100th year anniversary of the Battle of Gallipoli so most pieces will be in either English or Turkish. They have a dozen or more members at present and practice once a week (Wednesdays for now) at Işık Lisesi in Teşvikiye.

CorISTAnbul or the Corista Istanbul Chamber Choir consists of 16 Turkish and international chorists. A primarily a cappella group, they perform pieces that span all the way from the Renaissance to the modern day and in all languages in between. They also perform in prestigious venues and practice every Thursday evening from 8:00 p.m.-10:30 p.m. and one Sunday a month at ITU's Center for Advanced Studies in Music in Maçka. The focus is on perfecting polyphonic singing and choristers are trained by its professional director. Each week you have to learn one or two pieces on your own to come prepared and membership is by audition. HayCappella is another approximately 16-person chorus whose members are primarily Armenian. Members are taught basic singing skills and solfeggio. They also meet at ITU in Maçka on Tuesdays from 8:00 p.m.-10:30 p.m. and one Sunday a month.

Although not technically a choir, the Speech Bubbles School of performing arts is a unique Istanbul-based drama group that brings together people of all ages performing all sorts of musical productions. Originally started over 20 years ago by English and Drama teachers for English language students, Speech Bubbles is now a mix of professional and amateur actors, singers and musicians from the International and Turkish community. Children and adults of all ages and abilities are welcome to join their three-hour class on Saturday's from 9:30 a.m.-12:30 p.m., which devotes an hour each to acting, singing and dancing in a wide range of styles and genres. Every year, Speech Bubbles performs a musical and donates the proceeds to charity. Check out this year's family Christmas pantomime of 'Jack and the Beanstalk' on Dec. 13-14.