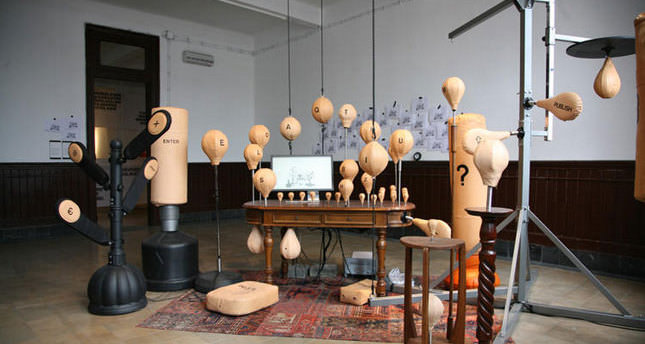 The second Istanbul Design Biennial, organized by the Istanbul Foundation for Culture and Arts (IKSV), opened its doors at the beginning of November at the Galata Greek School and Antrepo 7, under the title of ‘The Future is Not What it Used to Be.’

The second Istanbul Design Biennial features a main exhibition and a rich program with more than 54 projects that were selected from among 800 submissions by curator Zoë Ryan, Meredith Carruthers and Turkish design studio Superpool, which will help transform Istanbul's Galata Greek Primary School into the epicenter of the event and develop a visual identity along with the New York-based Project Projects. In Project Projects, new methods to define the future, by engaging in sight, touch, smell, writing and reading experiments, will captivate the audience that is already questioning the ideas of the future and trying to understand their own self-journey by searching the Projects.

Director of the Istanbul Design Biennial, Deniz Ova, and the exhibition designers, Gregers Tang Thomsen and Selva Gürdoğan, from Superpool were interviewed and presented information about the content and process of the event.

Daily Sabah: The title is "The Future is Not What it Used to Be." Do you mean "now we are going to say something new?"

Deniz Ova: Yes, we always say something new, but it is about catching the moment of what the future is now and what the different points of view and perspectives about the future or visions or dreams about the future are. Obviously, we are working in the context of design and architecture, so the curators Zoe and Meredith – created the conceptual framework that asks the designer about his or her manifesto and at the same time, asks what the future is now. I think these two questions bring different things together like questioning what time is and how do we perceive the future; is it a few days later? Is it tomorrow? Is it now? And asking the question about these are manifestos that give us a chance to think about the manifesto itself. Is it still about reading a medium or not and how do we curate the manifesto in the 21st century. It also gives us a chance to learn a little bit about the history, such as when were manifestos written. It also speaks to our place in time; right now, where we are in the moment? Not only is change the key to the entire world, I mean today, for instance, I saw the news; protests in Brussels against the government. We are in the moment of moving and I think about the manifestos; they are just very valid mediums to talk about and to ask questions and in framework if the biennial becomes a moment where design is.

Selva Gürdoğan: Also, what is new is that when you look at manifestos as curators, you look at manifestos in action – they were at all times in written documents, and now we can actually see it. The claim is that a manifesto can also be in action like changing the way you live; it doesn't need to be a claim that everyone has to change their life. A manifesto can determine that you are an individual who makes a statement about changing the way you are living or your choices or your acting.

DS: On the other hand, in some projects – for example "Repair Society" – we see that manifestos can be a collective thing that can be produced as a community.

DO: Yes, it is a collective manifesto asking us people to contribute to repairing the manifesto, which is an ongoing process and actually not ending at any moment, you can add to it constantly. Also as Gregers says, I think in this moment personal statements seem more important than collective statements, the feel and look of manifestoes in the '20s and '30s were more a proclamation about how society will have a better future and about a better social political situation. But I think in this biennial, even if we say in our time that everything is more personal, identities are more important and people are just saying single words about pressing histories, the collective idea is coming or is becoming more important right now, even in some projects where we again see collective proclamations. But as you said, proclamations are made collectively together for a future or maybe a brighter future all together.

DS: One of the timeless projects exhibited at the biennial takes us to the past and then goes to the future by meeting the designer and the craftsman: Crafted in Istanbul. Can you tell me about it?

DO: We've also been discussing what role crafts are playing, we have a very strong craftsman culture which is disappearing. The "Crafted in Istanbul" team which has been researching for the last two years is mapping the various craftsmen in Istanbul on an online platform. The collective shows that there is still a good resource in this city which can be used more efficiently and differently by designers in the future. More personal designs and more personal productions become important rather than doing only mass production. The manifesto, I think for Crafted in Istanbul is figuring out what will be transported and transformed for the 21st century and used in different ways. It's kind of a guidance that they're offering with the online mapping and what we show here are videos of the process documentation.

DS: Was it satisfying at the end of the whole process and the projects? What were you expecting and what happened when everything came together?

DO: Well, every biennial is another surprise. We felt very comfortable on our part, I can say. We are very comfortable working with Zoe and Meredith, Superpool, Project Project, because it was a super collaborative work and we have all been very communicative. By the end of it, we became family. We always had very large rounds of discussion with many people so we felt comfortable in the way that we kind of do things in the right direction and seeing everything coming together approved our good feeling and people coming to the exhibition said they feel very positive about the design – they feel comfortable even when walking down this area. And for sure it's an open-ended exhibition, it can continue in one way or the other, the discussion can continue. This is a very new biennial and right now we have the chance to experience the audience and the projects, so it's super exciting actually. I think it kind of works.

The cork furniture and the exhibition design

Gregers Tang Thomsen: The furniture material comes from Portuguese cork, normally they make cork stoppers or cork for bottles. But they have a lot of material that's not good enough for being used when you're talking about food. In the past they used to burn it to heat that actually, but they also had more clipped and they don't want to waste all that material, so they have been doing a lot of research about using it; how we can use this material, which is CO2 negative, and how to use the material that has a value for the environment in a productive way. You can give it a color and it has a different softness. That's why we used it because we were looking for something very well-known but it's actually a material for the future. Hopefully all these pieces, they will not be charged, they will go to schools or to the interested people. The idea of the biennial is that you are not wasteful, everything that's done is about a sustainable future.

About the process of the design, Zoe and Meredith set up a design community we were also in. They shared with us their ideas so we could, at the same time, develop ideas for how the school could be used that complemented their idea for the exhibition. We were very clear from the beginning that this entrance place is for the main home and the meeting place for the biennial, so it needs to be comfortable, people should stay here and prepare to go and see the building. So a kind of dialogue for eight months almost. Of course we didn't start to produce from the first day but it's been a dialogue going on between Zoe, Meredith, IKSV and try to figure out what's the right balance between all the pieces. This is kind of an idea about splitting; with these cork pieces you can make straight parts and you can make curved parts without wasting any material. We also split the building, you walk in one side and see something and walk down the other side and see something else.