Madonna as the new 'Goodwill Ambassador for Child Welfare' for Malawi 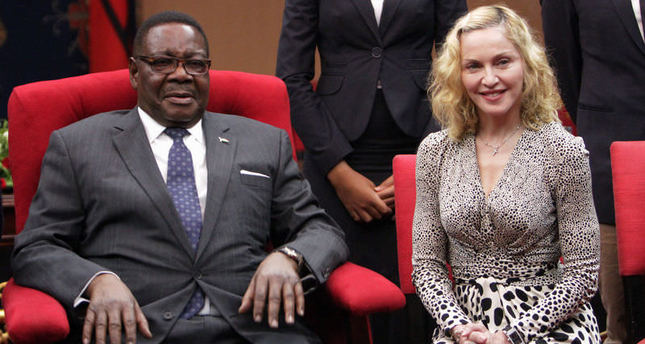 He said the appointment was "with immediate effect".

The appointment follows a meeting between Mutharika and the U.S. pop star at Kamuzu presidential palace in the capital Lilongwe on Friday.

The Malawian leader met Madonna with her Malawi-born adopted children Mercy James and David Banda at a remarkable ceremony that aimed to show that fences have been mended between Malawi and the singer after Madonna's public falling-out with former president Joyce Banda.

Before the meeting moved in camera on Friday, Mutharika hailed the pop star for her charity work to help children's education in the south-eastern African country.

"I ask you to continue your work in supporting and improving education in this country," Mutharika said on Friday. "You must also encourage David and Mercy to work hard in their education."

Madonna returned to Malawi last Wednesday to visit children and also hold talks with President Mutharika over her charity work.

"Malawi is a special country," Madonna told smiling Mutharika. "This country is special because that's where I adopted my two children."

Madonna has unveiled plans to build a 50-bed pediatric surgery and intensive care unit in Malawi.

The pop singer's charity organization "Raising Malawi" will build and donate the two-storey free-standing facility and will collaborate with Ministry of Health to help support operations for the first few years.

The new facility will double the number of surgeries for children performed at Queen Elizabeth Hospital and will provide the first dedicated pediatric intensive care unit in the country.

On Sunday, the pop diva is expected to visit school projects she has funded through "Raising Malawi" in Kasungu, a district in central Malawi some 129 kilometers from Lilongwe.
Last Update: Nov 29, 2014 2:25 pm
RELATED TOPICS