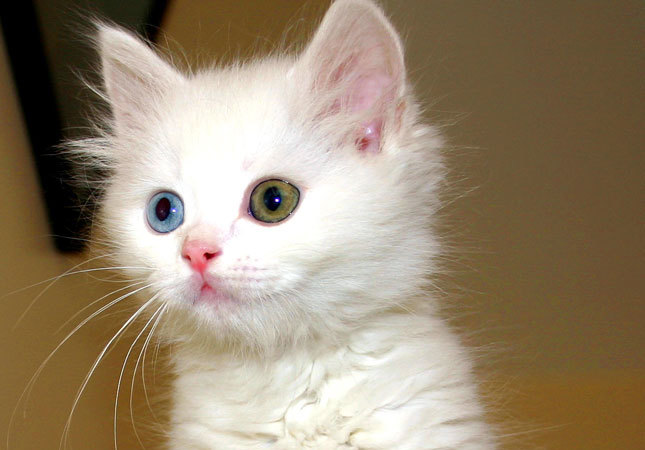 by AA Dec 12, 2014 12:00 am
Founded by Yüzüncü Yıl University to protect Van cats, Van Cat Research and Application Center is close to saving the precious felines from extinction. The Van cat is known for its friendly behavior, silky fur, lion-like walk, fluffy tail, mismatched-colored eyes and fondness for water, and is one of the rare animals not to be hybridized. To protect the breed of the Van cat, the research and application center was founded in the 1990s at Yüzüncü Yil University.

Since the day it was founded, the center has conducted research projects to facilitate the continuity and purity of the Van cat breed. And recently, successful studies have managed to produce positive results.

The center has been breeding new kittens using the adult cats in its cat house, and has banned people from taking the cats out of the province. Through their studies, the center has achieved an increase in the number of cats with one amber-green eye and one blue eye.

The General Manager of the Van Cat Research and Application Center and Associate Professor Abdullah Kaya told Anadolu Agency that this season has been "very productive" for them, thanks to their previous studies and research.

"If we continue to get successful results, the Van cat will be saved from extinction," Kaya announced. He also reported that his team has managed to decrease the number of kitten deaths. Some 98 percent of the cats that were born this year have managed to survive.

The scientists took the cats that had mismatched eye colors into captivity and gave those with the same-color to their caretakers. Kaya stated that they purified the breed while facilitating adoption for people in the province looking to take on a Van cat. He added that his team will continue to work for the protection of the Van cats.