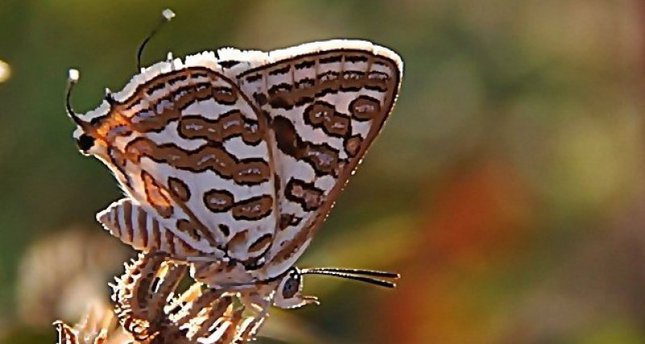 by Daily Sabah Dec 20, 2014 12:00 am
Six newly discovered species of butterfly have been recently identified in Hatay, a city with various endemic plants and natural wonders thanks to its suitable weather conditions. Ali Atahan, the head of the Subaşı Bird and Butterfly Observation Foundation, said that butterflies are regularly studied in the summer months around the city in order to record the exact number of species. Butterfly observation requires great effort because experts sometimes have to wait hours to take a photograph of a single butterfly. Atahan said that each year, a new species is added to the city's butterfly inventory. Last year, Azanus jesous (the African babul blue), a small butterfly from Africa that can usually be found in Lebanon, Israel and Jordan, was observed in Hatay. With the efforts of local observers, the number of butterfly species has now reached 161. The six newly found species were observed in the Nur Mountains where butterflies congregate due to the warm climate, which is reminiscent of both the Black Sea and the Mediterranean regions - an example of the rich and unique ecosystem of Anatolia. Atahan continued saying that Lycaena asabinus (Anatolian fire) was found on the high moorland of the northern and central parts of the Nur Mountains. Previously, the habitat of these two species was restricted to the Taurus Mountains. Lycaena ochimus (Turkish fiery copper butterfly) was observed at the tree line of the central parts of the Nur Mountains. Atahan said this species normally fly over the Taurus Mountains and its northern side. Pyrgus cinarae (sandy grizzled skipper) was seen on the slopes of the Nur Mountains overlooking the district of Hassa. Likewise, Polyommatus loewii (large jewel blue) was observed around the same location. Favonius quercus (purple hairstreak) and Hipparchia statilinus (tree grayling) were commonly seen on Kızıldağ, an area with the richest biodiversity of the Nur Mountains. There are currently 400 butterfly species throughout Turkey.