The history of Santa Claus and Christmas in Turkey 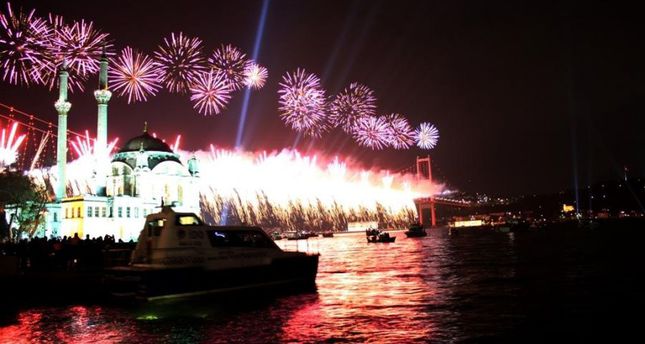 With its historic churches and breathtaking ambiance, Turkey is a bridge between Europe and Asia that instills the Christmas spirit with an atmosphere that combines the East and West

Anatolia is historically a land of multiple religions where everyone is free to perform their own religious rituals. Even though it is a rare situation to find in the world we live in today, Muslims, Christians and Jews live well together in Turkey. Now that December is here, Istanbul and other parts of Turkey are getting decked out with festive lights, Christmas trees and fancy decorations. This is not entirely because they are celebrating the birth of Jesus, but more so the celebration of the new and upcoming year. Whether it be hosting a dinner for your friends and family or going to a party, welcoming the new year is a tradition that most have done for years, even by those who do not celebrate Christmas for religious reasons. One of the biggest aspects of celebrating Christmas is exchanging gifts with loved ones. For children, the gifts are not given by their parents, but by the legendary Christmas character, Santa Claus. It is even said that Santa Claus was born in what is now Turkey. Lets explore the yuletide mystery of this acclaimed Christmas figure.

The man behind the story of Father Christmas, better known as Santa Claus, lived in the fourth century AD in a place known as Patara on the southwest coast of what was then the Byzantine Empire. His name was Nicholas and he was the son of a very rich family. When Nicholas's parents passed away, the young man was left with a fortune. Later, he became the bishop of Myra, a town further up the coast from Patara, which is now called Demre. Being a generous and big-hearted man, Nicholas used to climb on the roof of people's houses and drop coins down their chimney. When a citizen caught him in the act, his identity was revealed to the town and thus began the fairytale of the giving character, Santa Claus.

Upon Nicholas's death, a memorial was erected in the town and he was later canonized as a saint, which is why he is referred to as Saint Nicholas. Dec. 6 became associated with the feast of St. Nicholas, and years later, a bishop declared Dec. 25 as Jesus's birthday. Over time, the two celebrations began to be fused together. The Church of St. Nicholas is now located in the town of Demre in Antalya and special celebrations are held on Dec. 6 to honor him. It is also the church that holds St. Nicholas's original coffin, even though his bones were taken in the 10th century.

Turkey is a Muslim-majority country with 99 percent of the population being born into families that identify as Muslim. However, there are still small Christian communities and there is no prohibition on their religious activities due to the state's secular nature. In general, Turks do not celebrate Christmas, but they celebrate New Year with Christmas decorations. Since the basic idea behind this celebration is not the birth of Jesus, but New Year, the celebrations and festivities mark the countdown to New Year and having fun with friends, family and the loved ones. At the beginning of December you can get into the spirit of the season and New Years in Istanbul. Every fancy restaurant and café in Istanbul's lavish or tourist-friendly districts engulfs you with its decorations and festive atmosphere, and they are also open on Christmas and New Year's day. The ambiance is so vivid that you will feel as if you were in the heart of the North Pole. The most well-known districts that have an invigorating holiday spirit and beautiful decorations and related events are Nişantaşı and Beyoğlu – specifically Taksim – on the European side and Kadıköy on the Asian side. These places also witness a huge, crowded New Year's celebration with concerts and events while fireworks are set off over the Bosporus Bridge.

Shopping is another significant component of this time of year. Istanbul turns into a huge shopping center and many people rush into boutique shops, shopping malls and the Grand Bazaar to buy gifts for loved ones. One of the most preferred among them, especially for last minute Christmas shopping, is the Grand Bazaar with its affordable prices and eccentric items.

The landscape of Istanbul resembles that of any Western city celebrating Christmas. Strings of white lights drape the façades of buildings, evergreens are dressed in colorful balls, garlands adorn homes and hotels and inflatable Frosty the Snowman and Santa Claus figures smile from store shelves. Those who do celebrate Christmas as a religious holiday will be able to attend Christmas services in Istanbul's historic churches such as the Church St. Anthony of Padua on Istiklal Avenue with services in Turkish, Italian and English; the Ecumenical Orthodox Patriarchate in Fener with services in Greek; St. Helenas British Consulate General Chapel in Beyoğlu in English; Agla Triada in Taksim with Greek language services and the Dutch Chapel on Istiklal Avenue with services in Turkish and English.