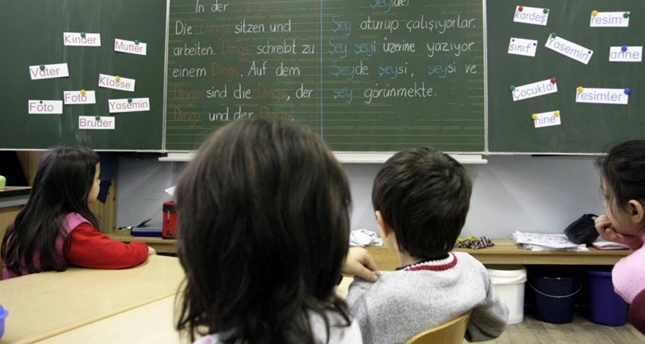 by Daily Sabah with AA Dec 25, 2014 12:00 am
Turkish language teaching projects have peaked in recent years. The heavy demands of foreigners to learn Turkish contribute to the improvement of Turkish language teaching centers both within Turkey and abroad. The Yunus Emre Institute - a prominent Turkish language center - and the Turkish Language Association recently held "Uluslararası Türkçe'nin Yabancı Dil Olarak Öğretimi Sempozyumu" (Symposium for Teaching International Turkish as a Foreign Language), focusing on technology-based education in Ankara.

Professor Hayati Develi, the head of the Yunus Emre Institute, announced during the symposium that the institution's radio station for Turkish learning will be on the air via the Internet in a few months. He said the institute had given Turkish courses at different levels to 25,000 people so far. Course books are prepared in accordance with the European Language Portfolio, Develi continued. "We need to prepare Turkish proficiency exams similar to TOEFL and IELTS. Our institutions are well-aware of deficiencies in Turkish language learning, and the necessary projects are currently being developed. Some of them are ready now," he added. The Turkish language distance learning project has achieved significant progress and will be finalized in 15 months. Level reading books will be available with CDs, and websites are being designed with rich teaching materials. Develi said the upcoming radio programs will broadcast news about Turkey and the world at scheduled hours and at different language levels. The institute is also planning to establish radio programs to broadcast theatrical performances. The two-day symposium was held to discuss how to better benefit from technology while teaching Turkish. And according to the Anadolu Agency, experts, Turkish language instructors and software developers gathered to design projects for the next five years. Technological advances should be implemented in a way that people can properly use them, another speaker said. Salih Çelik, the deputy secretary of Turkey's Education Ministry, stated the physicial capacity of schools has been increased, and more schools had been established in recent years, highlighting that access to education is not a problem in Turkey.